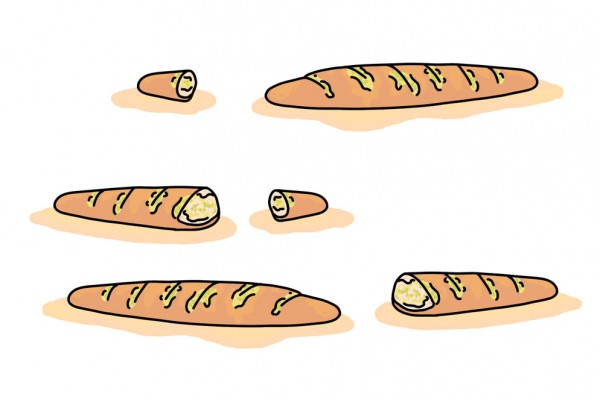 Garlic bread has to be one of the most humbling foods out there. On the outside it is but a simple meal of garlic butter and toasted bread. Yet, any garlic bread fan understands that there is much complexity to the dish. The pungent sting of garlic, coddled with the smooth undertones of butter, served on the finest toasted bread creates one of the most pleasurable eating experiences known to humankind. It transcends cultural boundaries. And yet, garlic bread is so deeply entrenched in our psyche as a pizza side dish, that only very rarely is it its own standalone meal. It’s not something that instantly springs to mind when you’re hungry, yet you’re never not hyped to eat one. But what defines a good garlic bread? Only some rigorous hands-on research would tell.

Before testing each garlic bread, the group engaged in serious discussions about what to expect from their garlic bread. Most agreed that they would prefer to have worse bread over worse garlic, as the garlic is what essentially makes the garlic bread. The breads got cold as we were in the review process, meaning they had to be microwaved which deeply impacted the bread experience. However, we were able to get conclusive results on where sells the best garlic bread around town.

As the first garlic bread for the evening, the bar was set pretty high. On first appearance, this was just your basic standard garlic bread. The bread was plain and looked barely toasted, you couldn’t see any butter or oil oozing out. We were all preparing for a subpar garlic bread experience. After being pulled apart nicely, the bread offered no real crunch. It was doughy to eat, and didn’t offer a great mouth feel. However, the bread was saved by the garlic butter. The garlic flavour was strong but not too overpowering, and each piece had a consistent garlic to bread ratio. Critic Editor Sinead stated that “when I think garlic bread, I think of this bitch. Not the best quality, but not bad, just standard”, while News Editor Erin described it as “the perfectly average garlic bread”. At only $4, everyone agreed that she knows what she’s doing, and she achieved it well.

Priced at $6 each, we all had high expectations for this garlic bread, and it delivered. Artisan style bread with sprinkling of Rosemary on top, that folded out into a beautiful platter, Hells gave us an experience alongside some garlic bread. Staff writer Sophia’s first comment was “oh my God look at the edge, it’s glistening”, which set the tone for this eating experience. Because it was divided in the middle, it was difficult to pull apart, but allowed us to choose our own pieces proportions. It’s garlic taste was on par with Pizza Hut’s, yet the bread tipped it over the edge that little bit. It had amazing mouth feel, enough so to justify another serving. Online Editor Andy said how “it feels wrong to compare this to the others, because the others are just garlic bread. This is something more”, while Sophia kept commenting on how sexy it was to eat. The floor opened to discussions about how this is one of the only garlic breads that could be its own thing, rather than a side dish to a pizza. However, the price point was enough to deter most from purchasing this bread.

On initial thought, Domino’s looked like a clear frontrunner to win this review. Everyone agreed that they’re all sluts for Domino’s, as their pizzas just hit different. Using the discount code 21174, we were able to snag a $2.99 garlic bread. Sophia was first to point out how shiny it was, as the oil had seeped to the top of the loaf. Sinead came in hot, saying that “the bread is good, yet the garlic tastes weird”. The garlic butter was more of a garlic oil, and offered a very grainy texture. The garlic flavour was severely missed, an didn’t really taste like anything. It felt like we were just eating a hangover rather than a delicious garlic bread. Andy pointed out how there was more of a crunch to the bread compared to Pizza Hut, but still didn’t live up to scratch. This garlic bread served the purpose of being a side dish to a pizza, but lived up to its $3 expectations.

An underdog in this review by being the only non-chain restaurant, we were excited to see what Poppa’s Pizza offered us. The top of the bread was coated in parmesan, and then unfolded into what appeared to be garlic bread. The tear apart ability was terrible, as the bread was too soft to pull apart nicely. Erin noted how at first glance it “looks like pesto”, and the jury is still out on whether it actually was or not. On the first bite, Sophia loudly exclaimed “NO. BAD”, while Sinead commented on how confusing the flavours were. The bread had a great crunch, and was very dry. However, the garlic taste was so confusing, and was compared to fish. It didn’t taste like garlic at all. The parmesan confused the palette, making it oddly sweet. Everyone was confused by this garlic bread, with Sophia claiming that it was “trying a bit too hard” to be garlic bread. Everyone agreed that this was more of a herb bread rather than a garlic bread. Erin stated how “If I ordered a garlic bread and that is what I got, I would be mad”, with Sinead stating how “she’s beautiful but she had no reason to be called garlic bread. It tasted like pesto and wasn’t garlic.” While this bread was interesting to eat, it did not constitute garlic bread.

Stepping out of the realm of pizza store garlic bread, we thought it was only fair to try premade garlic bread you can buy from the supermarket. Without an oven at our disposal, we followed the directions and microwaved this bad boy for 45 seconds. However, we highly recommended not doing that. At first glance, she looked cute. She had sesame seeds on top, and looked like what your mum served with spag bol to appear fancy. This was one of the only garlic breads to have what appeared to be garlic chunks, but this didn’t add much to the flavour. Erin commented that “it only tastes like garlic because you know it’s garlic”, while Sophia felt as if she was “punched in the face by a lot of garlic”. The bread was far too soft since it couldn’t be toasted, but the garlic margarine was as good as it could’ve been. It left a much longer aftertaste than the others, and oddly tasted like fish. Sinead and Andy decided to see if eating a piece uncooked would change how it tasted, and to their surprise it tasted better. Andy said that it was “less aggressively garlic” when eaten cold, and Sinead said that it was “more submissive”. You could more prominently taste the fact that it was garlic margarine rather than butter, and was so overwhelming. The main takeaway is that if you are going to purchase this, then you better have an oven to cook it in.

This was a bit of a wild card. Who really wants to make their own garlic bread? That kind of admin is best saved for when you’re going to a potluck and need to whip up something fast, but still deserved to be tested. After cutting up a baguette, slathering in some of this garlic margarine, and chucking it in the microwave, we were ready to rock and roll. This served as more of a guide of what to do for if you were to make your own garlic bread, rather than a review of the garlic bread itself. For instance, it is best to go for a roll rather than a baguette, as it will toast up more nicely on the crust while remaining a doughy centre. Alongside this, you need to really lather up the butter on both sides of the cut pieces, to make sure it soaks through. Unlike the others, this method does allow for creativity, as you have the capability to let your creative juices flow and add as much fucking garlic as you want.

After much debate, Pizza Hut came out as the winner of this review due to its garlic flavour. Hells was a very close second, only falling short due to its high price point. Domino’s was placed third, followed by supermarket bought and homemade. Don’t even bother eating Poppa’s.