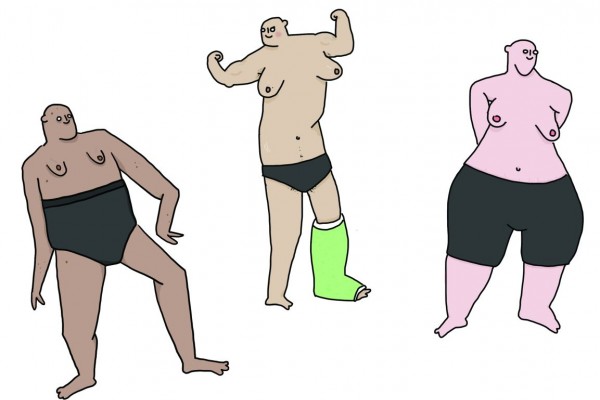 Period Underwear: Worth it?

Try something for me: what do you think of when I tell you to think of period products. You will have, no doubt, had tampons and pads spring to mind, maybe even the more recently popular moon cup, but how many of you thought of underwear itself? Probably very few of you did, unless you read the title of this article, and even fewer of you have sampled any. We often consider underwear to be unfortunate casualties of our monthly cycles, but the prospect of making the least fortunate clothing article the shining star of the monthly cycle is sure to be the pipe dream of our downstairs plumbing. Well, babe, it’s more likely than you think.

Over the last few months, three students who menstruate have been trialling out period underwear so that you can weigh up the pros and cons of investing in some serious stocks. And I mean serious. Period underwear can be expensive as fuck. The prices of the products these three folks tried ranged from $17 from Love Luna, to $39 from AWWA and $44.50 from ModiBodi. That is a big jump, but is it worth it? Let’s find out.

A barrier to beginning your period underwear journey is the concern that there will be leakage, and that is definitely something that our reviewers went through in the beginning. Rachel said she couldn’t use mooncups without leakage, so using them in combination with the period underwear was the perfect mix. Katie did mention that once she had a slight mishap during sleep, which she explained could have been caused by her sleep posture, but this only happened once. Miley Cyrus taught us that nobody’s perfect, and this extends to period products, but knowing that your panties have your back is a commeradory that will make you question how you ever went without.

Maintaining the underwear requires some work and, as Rachel observed, vital to do properly. This is to be expected with them being reusable, but the amount of overhead is surprisingly small. Before put in with the rest of the laundry, be sure to run them under cold water. In the grand scheme of things, cold hands are but a small price to pay for the benefit of easing the guilt experienced by contributing to the damage caused to our planet with disposable, largely non-biodegradable period-related waste. Be sure, though, not to include any fabric softener in the laundry and avoid tumble-drying, advice given by the manufacturers to ensure their longevity. Also mentioned by our participants, it is easy to run out of usable pairs when all of them are out on the line to dry, so back-up pairs are basically essential, but also costly.

So we know that these undies are fire, but that counts for zilch if you’re burning from an unruly chafe. Well, my vagina-bearing friends, you’re in good hands. For this, Rachel said of the Love Luna brand that they were the best, and were the cutest to boot. Maddie commented that the ModiBodi brand was great for this reason, especially in red. For many, there is an inescapable pressure for underwear to be attractive, even if this comes at a cost of comfort, but let it be known that there is period underwear that is tailored such that you can feel comfortable while not compromising on aesthetics.

Our reviewers started off not anticipating good results. Katie, for one, stated that she “expected disappointment,” and understandable position with how she experiences periods. As a reusable solution, they knew that the underwear would require a higher degree of upkeep, and expressed concern the pants may have an unpleasant odour. This couldn’t be further from reality.

When was the last time you were amazed by period products, if ever? Well, this was probably the first time out test subjects were. Every complaint regarding the standard disposable products was circumvented. As a glowing recommendation, Katie admits to being “fully converted”, and Maddie to having “enjoyed using them overall”. Not only were their trepidations proven unfounded, but Katie reported that her cramps were not as severe as with using tampons, going so far as to say that “it was the best and most painless period [she] ever had”. Rachel calls period underwear a “game changer” that she “could not recommend enough”.

It definitely isn’t a cheap way to manage your period. Rachel said that it is easier to manage the labour if you have three or four pairs, but that requires a significant investment. She believes that it is worth the investment for the peace of mind. Katie points out that if you are looking at investing, you should definitely check out the websites for bundle deals. Though the down payment may be daunting, trust that the amount saved on purchasing disposable products is worth it.

Rachel: These ones were my favourite because they were the most comfortable and similar to wearing regular underwear (aka looked cute). They are not as absorbent as the others so may be susceptible to leakage if you wear them on a heavy day.

Katie: So comfy and so cheap! Literally, these are cheaper and as comfortable as my normal undies I buy? How is that possible?

Maddie: Felt less like normal underwear and more like you were wearing a pad. I probably wouldn’t wear these under anything tight, but they were so secure I would definitely wear them overnight.

Rachel: These pants are a good time. The fit is nice, although they do ride quite high. I am so confident in these that I would wear a light wash of denim with these pants as long as I matched them with the right time in my cycle.

Katie: Damn I felt so comfy and sexy in these, the mesh panelling was hot! I literally bent over the bed and asked my partner to spank me, these made me feel like a fucking queen...A bloody comfy queen

Maddie: Unfortunately the wrong size was selected and was unable to review this one.

Rachel: The absorbent area on these pants was quite prominent. This made them feel like wearing a sanitary pad and generally a bit saggier around the butt than the others. But I cannot fault them on getting the job done. The absorbance was solid and I had no fear of leakage.

Katie: Really wide and thick gusset and undies seemed slightly baggy, overall still great, thickness could be to do with the heavy absorbency.

Maddie: These were the most comfortable and even kinda cute in red. On an average day I would be comfortable wearing them out and for most of the day.