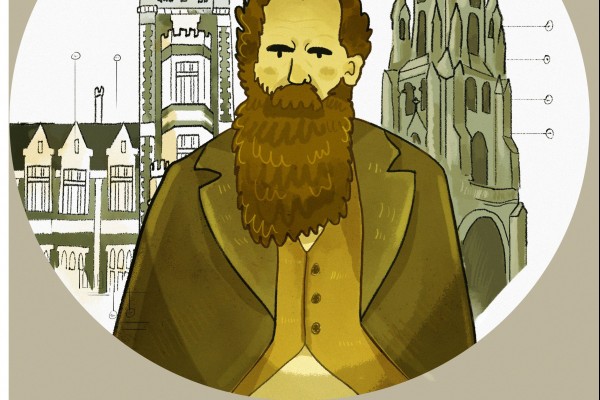 YOU SHOULD KNOW THE NAME ROBERT LAWSON.

His name should be on your lips when you kiss your lover. There should be tattoos, monuments, babies, decorative gardens, all named in his honour. Robert Lawson carved the very fabric of Dunedin, sculpted our culture in his muscled hands. He designed the buildings you love, literally the only buildings worth talking about in Dunedin. This is an ode to a man, a myth, a good cunt.

Forget Robert Burns, who just wrote a few poems and cried a lot. That wanker doesn’t deserve a statue, especially when he’s SCOTLAND’s national poet. Robert Burns never even came to Dunedin. (He may also have been a rapist, but that’s another story.) There are lots of Robert Burns statues all around the world; he is basic, irrelevant, and he contributed nothing to our small city, apart from his nephew being an early family or some shit. Robert Lawson is where it’s at. The fact that Robert Lawson has no kind of dedication in this city is an appalling miscarriage of justice.

I first discovered Lawson in my second year, where I lived in this dreamy, falling down Victorian flat. There was a hidden maid’s quarters in one room, a tiny kitchen and a beautiful winding staircase. It was romantic and hugely impractical and I was compelled to find out who exactly designed such a building. The architect, it turns out, was Robert Lawson. And boy, did he have a story.

Born in Scotland in 1833, Lawson trained as an architect then immigrated to Australia at the hot age of 21 and tried successively to make it as a miner in the gold rush boom. In 1862, he won a competition to design First Church and came over to our small shores. A classical and gothic architect, Lawson built a LOT of buildings in Dunedin and Otago. Get ready, folks.

This is a list of the most notable things that Lawson designed, but there’s so much more. Sadly a lot of it also got demolished because human beings do shit things sometimes. I’ve put down the name of the establishments that are currently in Lawson’s buildings, but rest assured that Lawson did not design a building for Carpet Court, he designed them for bourgeois men with long names:

Otherwise, in the words of student Alice Jones: “Nice building? Who to thank… Lawson.”

BUT THEN Lawson was commissioned to design the infamous Seacliffe Lunatic Asylum. This project was meant to be Lawson’s crème de la crème, his most expensive, most adventurous project, designed to house upwards of 500 patients. But, the design was plagued by structural problems, and only three years after the opening, a major landslide occurred, knocking out the north wing. A legal inquiry happened, where Lawson was found "negligent and incompetent" (same, babe). Disgraced and unemployable, Lawson fled Dunedin and threw himself into a ten year self-imposed exile. Only at the age of 67, did Lawson come crawling back to this beloved city and help design a handful of residential and commercial ventures, clawing back his reputation metre by metre.

Friends, Robert Lawson died at age 69, like the legend he was. He was buried in Dunedin’s Northern Cemetery, without a monument. He’s estimated to have been behind 65 churches, 21 banks, 134 houses, 16 schools, 18 hotels, 15 civic buildings and 117 commercial buildings. Dunedin would not be the same without him. Rest in Peace, angel.

Oh and worse of all? Lawson designed the pedestal for the Robbie Burns statue. The very insult of it! It should have been him, my darling, that was cast in bronze and laid upon that marvellous pedestal. You know what? God, I’m so mad. Fuck it, I’m starting a Change.org petition.