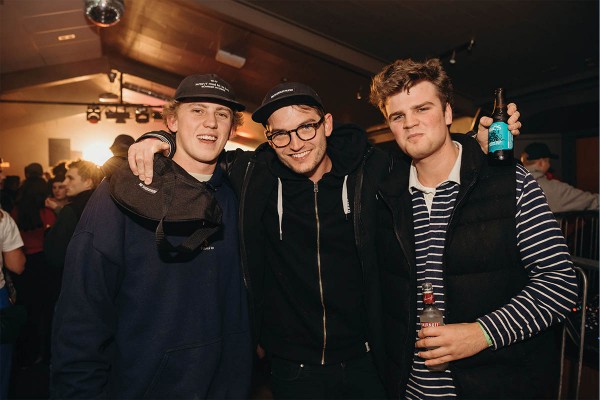 Students to Watch: Hamish and Angus

Hamish Todd and Angus Tylee are proof that, sometimes, a mate’s hairbrained scheme isn’t as cooked as you might first think. From a bedroom in Arana (lol) in 2017, the duo deduced that if no one else would bring drum and bass to Dunedin, then, fuck it, why couldn’t they just do it? Hamish said that back then “there just weren’t any gigs on. We were just like, stuff this, let’s do our own ones.” At that point, Angus already had some work experience through Rhythm and Vines, with the help of founder Hamish Pinkett, who Angus said he just hit up via email. His boss Josh Smith – head of R&V’s artist department - would become a mentor for him and Limitless over the following years.

Creating a promotion company doesn’t happen overnight, of course. It would take until 2018 before Limitless Touring was official. Since then, they have sussed tours with headliners such as Flowidus, Upgrade, Lee Mvtthews, SIN, Technimatic, Wax Mustang, and many others. Their next big bash in Dunedin, Baseline, is expected to attract 2000 punters.

The duo’s first banger was an outdoor music festival in Martinborough. As a start-up, they struggled to convince artists’ agents to get involved, but managed to bring the Aussie-Kiwi drum and bass duo Flowidus to Dunedin to have a gig during Re-O Week in 2018. It completely sold out. Hamish said, “It was epic, gave us a lot of confidence.” Now, it's not unusual for the pair to sort tours through Auckland, Wellington, Christchurch and Dunedin.

Hamish explained: “When people show up to an event, they might think ‘these guys have done a day's worth of work’, when it's not the case – it’s really months’ worth of planning, time management and risk assessment to make sure you won’t be losing money.”

“[The easy part is] getting in touch with the artists, they put their agents emails everywhere, they want to do the gigs, get the exposure,” he said.

While Hamish wraps up the last of his Commerce and Accounting Degree, Limitless Touring is a side-thing. Same for Angus, who is about to start a full-time job with Good Authority, which he described as “a digital transformation agency specialising in providing technical solutions for the live entertainment and festival industry”.

Now that they are established in the promotion scene, their biggest challenge isn’t getting acts on board, but making sure that their gigs don’t clash with anyone else’s. Despite the difficulty, they are stoked that this means there is more drum and bass in New Zealand.

Their advice for any student who are considering pursuing their passion, is to “get into it as soon as possible”. Hamish said, “Angus and I took a bit of a gamble starting it, and it's ended up working out, because we went with our gut.”

A shoutout is owed to the bradas: Hamish said that starting this in Dunedin with all of their mates around has been an advantage. “The streets like Castle, Leith or Hyde, even if they're not your good mates, they’ll still go [to your gigs] and support it.”