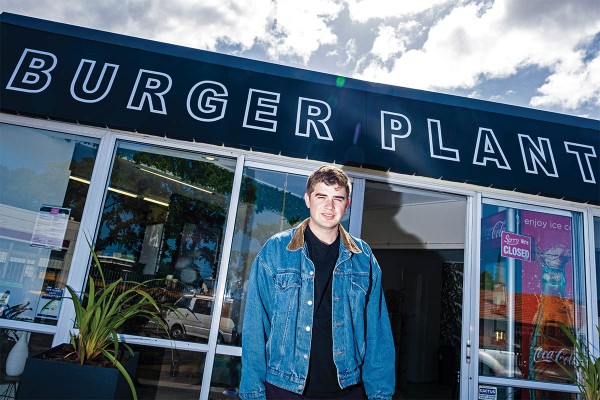 Up and Cuming: Burger Plant

In recent months, anyone who has driven down Great King Street has probably noticed the absence of Golden Sun Takeaways. The once iconic, always faithful fish and chip institution has instead been replaced by a mysterious new building named ‘Burger Plant’.

Upon noticing this dramatic and unexpected change, I began to wonder what exactly “Burger Plant” was. Was it some kind of new conspiracy run by the GCSB? Was there perhaps some kind of secret burger mafia laundering money? After having these questions for a number of weeks, I decided it was time to get to the bottom of this new development.

Despite the mounds of speculation, it turned out to be none of the above. Instead, Burger Plant is an up-and-coming vegan restaurant owned by 21-year-old Thomas White, who is as entrepreneurial as he is attractive. I sat down with him on a rather early, cold, Wednesday morning to talk about all things vegan and professional, as well as stare into his sparkling blue eyes.

My first question was how exactly a 21 year old managed to open a restaurant, let alone one that would make both his parents and Greta Thunberg proud.

Thomas has been involved in the Dunedin hospitality scene for a few years now. After studying Hospitality Management at the Polytech and working as a chef for four years in a variety of restaurants, he began to notice a gap in the market when it came to cheap and accessible vegan food. This market gap, paired with the rampant rise of plant-based diets, began to open up new business ideas which Thomas managed to jump on in the nick of time.

“I used to have a stall at the Farmer’s Market for about seven months and worked at a few places in town,” he said. “I noticed there was a gap in the market, and people were changing their diets. Not just into veganism, but cutting down on meat in general.” The rapid rise of plant-based diets in Dunedin has also meant there’s a new philosophy behind the place. It’s not so much about force feeding veganism down people’s throats, but rather about the best, most effective way to make an environmental impact. “I figure if I can get someone to cut down on meat consumption for three meals a week, there will be more of a chain reaction. People will just begin to do it more and more, which makes a bigger impact than just one person being vegan.”

Despite his years of experience, his youth does seem to play a crucial part when it comes to people questioning his success and credibility. “You get a lot of negativity from other people, who often say it won’t go well. But at the end of the day, if it doesn’t go well, it doesn’t go well. That’s just the nature of business.”

Although people (ahem, boomers) may see his age as a disadvantage, Thomas sees it as a positive thing. “It’s better to do it now when I’m young, when I don’t have a family or a house to lose if the business fails. I’m only 21, the worst thing is I lose a lot of money, but then I can just start again.”

Although Thomas seemed to have a very logical business plan, there was still one burning question I had despite his well-reasoned explanations. The location. Golden Sun Takeaways was a classic staple to any student diet and it fit right in with the other corporate fast food counterparts just up the road. So why did this seem like the perfect place to open a vegan restaurant? Was this all part of the plan or much rather a coincidence?

“It’s a hub for students, if you’re going to go out with your flat, it’s likely you’re going to come here. Most of my clients are students, it makes sense to be somewhere that’s accessible and easy for them to get to.” Thomas seems to be confident in his answer, but can he live up to the legend and legacy of Golden Sun? Only time will tell.

It was at this moment I decided to really get down to the nitty gritty. We had talked about all the nice, generic, inspiring bullshit for a while now. The sexual tension was building, his sparkling blue eyes were staring into my puffy, tired, baggy eyes. I tried to play it cool, hoping he didn’t notice my sweaty hands or red face as I geared up to ask the most highly anticipated question of the morning.

It was at this moment I knew I fucked up any possible romantic interaction. Thomas leaned back into his seat, doing that awkward nervous laugh. You know, the one you would do if someone’s dog dies and you started laughing, or if you get called out in a lecture. “I mean, that’s a bit of a personal question,” he responded.

“I guess it’s technically not [vegan],” he finished. As much as I wanted to launch into a much more philosophical conversation, I decided to hold back. But did he take into account any ethical considerations when formulating his response? Although it’s a substance from a living thing, does consent come into play? What if you don’t swallow?

I decided not to venture forward. I simply nodded then asked yet another simple and generic question. He then told me his advice for anyone who wants to start a business is to “just go for it. Don’t be a pussy.”

I thanked him for his time and said goodbye, walking my merry way out of the building. To conclude, you should just go to Burger Plant and see for yourself. It’s funky, it’s fresh, it’s sexy and it won’t hurt the planet.