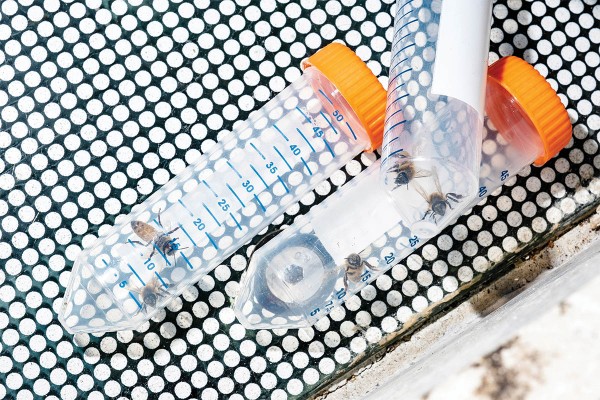 Bees on the Brain

Have you ever felt a telepathic connection with honey bees? Well, you may be closer than you think. Otago’s Zoology Department has recently published a paper describing the similarities between certain bee brain waves and those of primates (including humans).

Paul Szyszka, Lecturer and Researcher from the Zoology Department, has been working with bees since receiving his postgraduate thesis on bees at the Free University of Berlin, Germany.

Paul has a secret honeybee hive on the roof of the Zoology building, where he collects the bees for researching. One Zoology student said, “Wait, bees on the roof? This is why I’m getting a degree and they don’t even tell us?” The roof is off-limits to unauthorized people, but grab a harness and some friends and organize a bee heist if you’ve got a free evening.

Once retrieved and put in small plastic vials, the bees are put to sleep in an ice bath. The sleepy bees are then strapped up in little bee jackets, achieving pollen jock status. When they wake up, their antennae start moving,

His research involved training honey bees to react to an odour, one of them being strawberry. “The one you put in cakes, it smells terrible, but works.” After exposing the bees to the smell, they are then given a little sugar water until they recognize the smell to mean food. Pavlov’s dogs are quaking in their boots.

After the bees have learned the signal for a snack, they’re tucked under a microscope and hooked up to a machine to measure their brain activities.

Why is this so exciting? The alpha waves look nearly identical to those of humans and other primates. Bee’s brains are a completely different structure to human and other mammals’ brains. There are two big parts called mushroom lobes, which are theorized to be similar to the prefrontal cortex, where decisions are made.

Alpha waves were chosen in particular because of their link to cognitive function in vertebrates, which is linked to memory and attention. The pollen jocks are responding to things the same way we do, using the same frequency. This raises the question of where these waves came from and why they’re the same between such different species.

The honey bees used in the study are currently living in a hive on the roof of the Zoology building, and we suited up to collect them. “Honey bees aren’t actually as good as we think they are.” There are 27 indigenous bees in New Zealand, honey bees are not one of them. They’ve been bred to be the most efficient honey producers and actually take up resources needed by native bees.

Hopefully, the increased study on bee brains could open new channels for our understanding of brain evolution. Maybe one day we can ask the real question, do bees really like jazz?