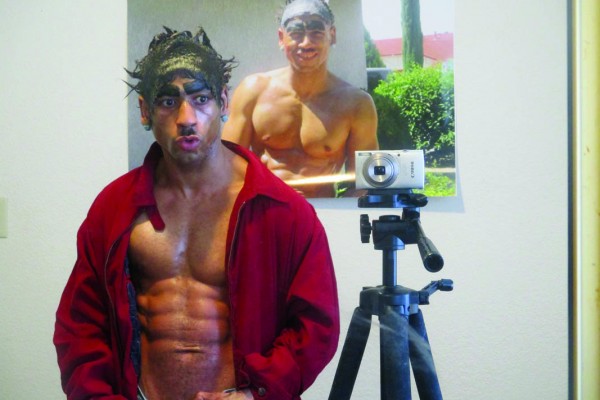 Why is he shirtless? Why can’t I stop watching? Why does he do this?? BuffCorrell, who had previously never given an interview, has been an online legend - and mystery - for a decade now. Critic scored an exclusive interview with him. He answered my questions over email, and didn’t know how to turn caps lock off.

Correll Budford II (known on YouTube as ‘BuffCorrell’) is a 37-year-old from Sierra Vista, Arizona who started uploading exclusively karaoke style covers to YouTube in 2010. Since then, his fever dream-like covers have accumulated fan base of over 240,000 subscribers.

Each video holds the same format. A greasy haired, thick eyebrowed man dancing shirtless in the mirror with a picture of himself behind him, absolutely belting out a semi tone-deaf performance of songs ranging from Slipknot to Elvis. In the decade since launching his account, he has uploaded over 1200 videos.

Despite having well over 100 hours of shirtless content, there remains so much mystery about the man. He isn’t the best singer (though is an amazing performer), yet he is constantly putting out new covers. It begs the question: Is he extremely dedicated to a joke, or is this a genuine passion?

No one knew the answer - he had never given an interview. Until now.

Correll’s first video was a cover of ‘I Will Always Love You’ by Whitney Houston. Correll said that “IN 2010 MUSIC CHANGED TO ME AND THE ARTIST I LIKED WERE NOT MAKING GOOD MUSIC ENOUGH TO BE MAINSTREAM OR ON THE RADIO SO I FOUND MYSELF JUST NOT LIKING MUSIC AND I HAVE A LOVE FOR MUSIC SO I MADE A YOUTUBE CHANNEL TO PUT MYSELF IN THE MUSIC GAME”, and from there, his channel exploded. His channel has over 14 million views total, with his most popular video being his cover of ‘The Less I Know The Better’ by Tame Impala. As he covers a range of genres, each cover seems like it would be a rigorous process. Correll bases his content on the desires of his fan base, saying that “MY PROCESS OF MAKING VIDEOS IS LISTENING TO WHAT THE PEOPLE WANT AND STUDYING THE ARTIST MUSIC THAT THEY WANT AND GIVING MY BEST THE DAY OF THE COVER.... I AM A FAN OF MUSIC SO I KNOW THE SONGS THERE TALKING ABOUT BUT I REALLY HERE THE MELODY BEFORE I LEARN THE LYRICS.” Honestly? We stan a king who cares.

Although singing may not be his strong suit, his true talent falls into two areas; dancing and personal fitness. When it comes to his dance moves, Correll says that “DANCING WAS MY FIRST THING.... I COULD ALWAYS DANCE MY FATHER WOULD TELL ME TO DANCE ALL THE TIME.... IF MUSIC WAS PLAYING HE WOULD TELL THEM TO TURN THE MUSIC UP AND TELL ME TO DANCE AND I WOULD....HE WOULD WAKE ME UP IN THE MORNING AND TELL ME TO  GET UP AND DANCE LOL...BUT MY DANCING IS  JUST ME AND A LIL BIT OF EVERY  DANCER FROM MICHAEL JACKSON PRINCE TURBO AND OZONE JUSTIN TIMBERLAKE JUSTIN BIEBER MICK JAGGAR AND ON AND ON.” His passion for dancing slowly transcended into the realm of his gym routine, to which he started bodybuilding to help lose weight. This is why he has the iconic poster of himself on his wall, saying that, “WHEN I FIRST STARTED BODYBUILDING I NEEDED A LOT OF MOTIVATION AND COULD NOT REALLY FIND ANY SO I STARTED PUTTING PICS OF MYSELF FROM WHEN I WAS OVERWEIGHT TILL NOW AND IT HELP ME BUT REALLY THE VIDEO SET UP JUST CAME TOGETHER I WAS REALLY NOT THINKING ABOUT THAT ......THAT JUST  HOW IT CAME OUT.....JUST THROUGH THE YEARS TRYING SOMETHING AND TRYING SOMETHING AND IT COMES OUT LIKE THAT.”  Looks are something Correll prides himself on, especially his hair and eyebrow combo. I mean, the dude has countless Facebook albums of countless photos of himself. While some have criticised it in the past, he says that it is just him expressing himself, and that it’s “JUST ME TRYING THINGS OUT ALL THE TIME AND JUST ENDS UP LOOKING LIKE THAT OR SOUNDING LIKE THAT”.

Putting yourself out there for the world to see if no easy feat, but Correll’s passion for becoming an established singer and dancer is what keeps him going. “I STAY MOTIVATED TO MAKE VIDEOS BECAUSE I HAVE A LIST OF THINGS I WANT TO GET DONE AND BEING AND GREAT SINGER AND DANCER IS ONE OF THEM,” Correll says. “I HOPE TO COVER MORE NEW ARTIST AND ALSO START WRITING AND MAKING MY OWN MUSIC ON DIFFERENT INSTRUMENTALS AND ALSO GOING BACK TO DOING JUST DANCE VIDEO AND SHOW PEOPLE MORE OF MY DANCING SKILLS BUT ALWAYS STILL DOING COVERS AND KARAOKE.” He encourages his audience to “ALWAYS LISTEN TO YOUR PARENTS BECAUSE THEY HAVE YOUR BEST INTRESTED AT HEART AND NEVER TAKE LIFE FOR GRANTED AND DO WHAT MAKES YOU HAPPY”.

BuffCorrell may just be one of the most sincere and earnest people out there. He’s just out here straight vibing, living his fantasy and encouraging others to do the same. While some may mock him due to his uncouth way of performing, who are we to criticise?

BuffCorrell is the you that you wish you could be.