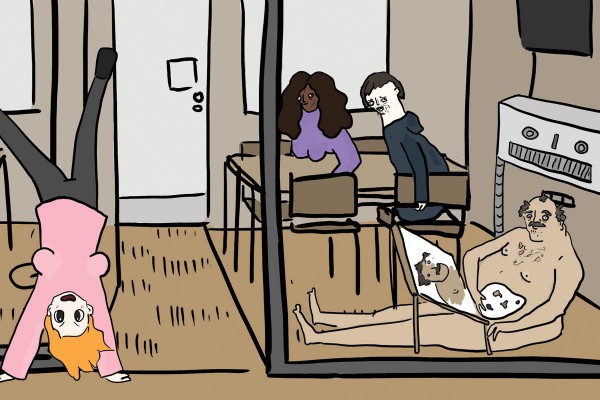 It’s a rainy Saturday evening in Dunedin. You took five too many nangs last night, forgot there was a hole in the butt pocket of your jeans and, as a result, lost your car keys. You’ve also been ghosted by your last five Tinder matches, three of whom have unmatched you altogether. In other words, it’s time to head to the library, crack open the books, and churn through some academic drudgery.

You assemble your usual studying posse, plodding into the living room of your flat. “Aaaooooooowwwwwwwwiiiiiiii!” you cry, utilising the standard birdcall.

One by one, they file in. There’s Marco diAntonio LaPizza, the 42-year-old Italian painter who is flatting with you for a semester while he finishes his collection of watercolour nude self-portraits. There’s Tangerine, the feisty, orange-haired anime character who was summoned into corporeal form after you inadvertently left your laptop streaming anime while reciting Latin for your presentation (she’s been living in your closet ever since). There’s 4REAL A.C., the sentient heating and cooling unit from 3039 who was accidently stuck in a time warp and sent back 120 years. There’s Belladonna Symphona, the Nigerian pop singer and former princess you rescued from lions on holiday last year (she subsequently transferred to Otago because she developed a massive crush on you).

Finally, Kyle Jones strolls in. Kyle is perilously skinny, looks like he hasn’t taken a shower in five years, operates a cracked iPhone 5, wears a destroyed pair of checkered slip-on Vans everyday, and has at least two STDs at any given time (you’ve all seen him, he skates by you every day on his way to class). His facial hair is somehow both sparse and long, giving the impression that he has glued pubes to his cheeks. Kyle secretly thinks looking like he crawled out of a rubbish bin is a fashion statement, even though his parents are ridiculously wealthy Auckland socialites. He used to date your old roommate, but then they broke up and he simultaneously took over her lease. He somehow has failed to finish his undergrad even though he was already a fifth-year when you were a fresher.

You all head down to Central Library and take over a table. Marco sets up his easel and that thing with all the paints on it that artists hold in one hand (which you’ve forgotten the name of) and begins painting.

“It’s called a palette, you uncultured pig,” says Marco. “None of you filthy British would understand true artistry.”

“We aren’t British. This is New Zealand,” you say.

“You speak English and you are ugly, what is the difference?” says Marco.

You shrug, not being able to actively dispute this.

“What are you studying for?” Belladonna asks you, fixing the three multi-coloured bows she keeps perched atop her hair. She is sitting very close to you, as usual.

“Ok, me too!” says Belladonna. She winks. “I’m not taking physics, but it’s basically my favourite subject.”

You sigh. Belladonna has already transferred into every paper you’re taking except for physics.

“Please identify the location of all nearby outlets,” 4REAL A.C. drones in his robotic monotone. “I require electrical charge.”

You point him towards one. He plugs in and begins powering up, emitting a loud whhhhrrrrrrrrrrrrrrrrr. The three students nearby all pack their bags and leave.

An AskOtago rep gives you the stink eye, but walks away.

The air around you is becoming frigid thanks to 4REAL. This is your trade off for not having to pay heating bills in winter.

Tangerine says something in Japanese, then does a cartwheel. No one seems to notice.

“Are you even taking any papers?” you ask her.

She says something back in Japanese and picks her nose, then flicks it on the floor. Marco is disrobing to begin painting himself. Kyle appears to be trying to take a dick pic under the table. The AskOtago guy is eyeing you again.

“Maybe we should move to a study room,” you say.

Safely out of sight in more private environs, your friends finally get to work. The physics is coming along nicely, even with Belladonna breathing down your neck.

After an hour or so, you excuse yourself for a bathroom break. You void your bowels, wash your hands, and smile at yourself in the mirror. Standard procedure to boost your confidence. You’ve been worrying about your nose being too big lately, ever since your ex said it was when they dumped you. You pinch it a couple times for reassurance. As you leave the bathroom, you see Kyle entering.

You return to the study room and open the door. Immediately the stench hits you.

On the table in the middle of the room is a massive, steaming turd. The smell is overpowering. Your eyes water. Your throat closes up. You can feel bile rising from your gut. Even the air feels dirty. A lone fly circles the pile of faeces.

Everyone turns to look at you. “What is the problem?” says Marco.

“What the fuck is that?” you point to the turd.

It is as if everyone is seeing it for the first time.

Tangerine chirps something in Japanese, then shrugs.

“I do not possess olfactory senses, nor do I defecate, so I am not perturbed,” says 4REAL A.C.

“Abhorrent!” says Marco. “Typical of Commonwealth trash. I suppose this is where you draw inspiration for your cuisine?” He goes back to painting himself naked.

“Listen,” you say. “This is outrageous. We’re definitely going to get fined like a zillion dollars for this. Whoever did it needs to clean it up, and fast. And like make it sanitary and stuff. Like, what the fuck?”

No one moves to claim responsibility.

“Yeah, guys,” says Belladonna. “Someone needs to own up!” She puts her hands on her hips.

“I’m not counting you out,” you tell her.

She looks shocked. You scan the room, eyes narrow.

“It could’ve been anyone. Except Kyle and I, I guess. He just went to the bathroom. But I just don’t understand how the hell someone took a shit on the middle of the table and none of the rest of you saw it. It makes no sense.”

“I was painting,” says Marco. “A layman like yourself wouldn’t understand, but to be engaged in the creation of art is a singular pursuit. How could I possibly be distracted by mere faeces?” He shrugs.

Tangerine turns, shakes her buttocks at you, and appears to finger her asshole from outside her skintight leather pants. She says something in Japanese and blows a kiss at you.

“A likely story,” you say. “But you’re also from the future. So all bets are off. Also, we aren’t talking about carbon, we’re talking about faeces.”

“I have been performing research, and have found that your nose is 78% larger than your average peer’s nose,” says 4REAL. “By most human standards, you appear to be considered ‘ugly’.”

“Whoa chill guys, it’s getting heated,” says Belladonna. “I think you have a perfect nose.” She winks at you. “I didn’t do it of course,” she continues. “I’d never do anything like that, not in front of you. Not after you saved me from those lions last year.” She smiles.

“Shut the hell up! Everybody!” you say. “It doesn’t matter. I’ve put the clues together. I already know who took the shit.”