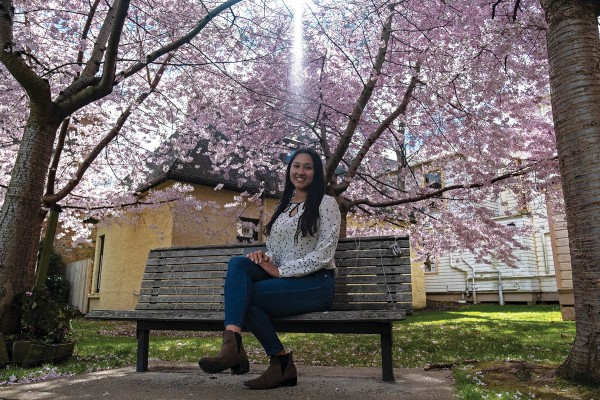 There was never doubt in Anna Clark’s mind about where she was going to head in life. When she was 15, she knew she wanted to do genetics and from the age of four, knew she’d love to work with animals. Studying Genetics and Zoology in undergrad, Anna has combined two lifelong passions and is now undertaking postgraduate research for her Masters in Genetics. Anna’s research involves investigating a pest control technique called “gene drive,” where you can bias the sex ratios in offspring or cause a sex-bias with fertility.

With similar research being conducted overseas in mosquitoes for malaria eradication, Anna’s research on mammals has the potential to be part of a long-term solution in New Zealand as part of our Predator Free 2050 goals as well as having international pest control applications. As a Pacifika student, Anna also hopes to inspire the next generation of minority scientists.

Anna cares a great deal about conservation. 25 million native birds are killed by invasive pests like rats in New Zealand every single year. Rats can multiply so quickly that over the course of 18 months they can have one million descendants. In comparison, two kiwis might be lucky to have two chicks in that same period. Anna says that trapping and poison are labour intensive and costly pest control methods and are therefore only a temporary measure. While she admits that gene drives may not be the entire solution to our pest control problem, she says they are definitely a step in the right direction.

As of 2003, Genetic Engineering has been banned in New Zealand. With the Conservation Minister, Eugenie Sage, banning research funding for genetic pest control research, Anna is reliant on overseas funding sources in order to carry out her work. She also has to go through rigorous permits to get permission for her research and is mostly approved because her work is purely theoretical with no lab work involved, utilising publicly available data.

There has been a recent call for revision of New Zealand’s out-dated genetic engineering legislation. Anna said,  “None of the legislation holds up now as we have all this new technology and precision editing through CRISPR techniques. We need to be looking at these new technologies on a case-by-case basis.”

Anna’s research has recently seen her complete a TED talk in Christchurch to discuss her research. “I was kayaking in Murchison in April this year and someone was asking about how we could target fertility in our pest control populations. I leapt to my feet with an elevator pitch. It turned out that one of those people was one of the organisers from the TED committee. They called me up a few weeks later and invited me to talk at their event.”

One year ago, Anna was in a cycling accident and has been recovering from a serious brain injury that has delayed her Masters degree by six months. She said, “the TED Talk was a cool thing because it was like, I'm really on the road to recovery now”.

Anna cites Greta Thunberg as a source of inspiration in her work, stressing that we cannot leave current modes of pest control as a legacy to the next generation. “I think we should redefine our clean green image and think about what it really means for us as New Zealanders. If we need to make changes to protect our identity, wildlife and wilderness, we need to be looking into that and leave no stone unturned.” Anna said that as kiwis we are innovators, “where there is a problem, we are going to find a solution.”