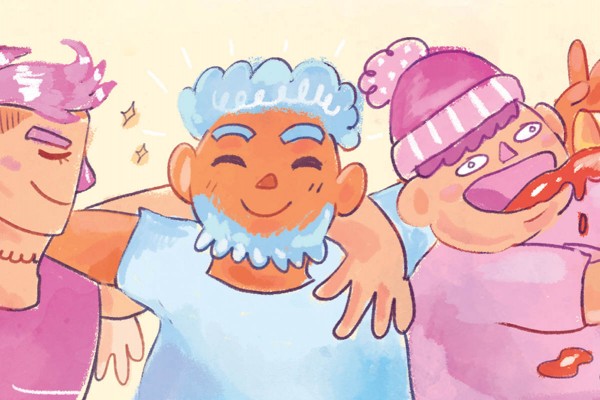 Lad shitposting is a delicate art form. In the past year or so a renaissance of sorts has risen through the weeds of Facebook algorithms. They love all things beer, caps, DnB, and are typically your average breathas. I mean, shit, some pages even have more likes than Critic Booze Reviews.

Lad culture generally cops a bad rep when it comes to things like toxic masculinity, but these pages are looking at challenging that though a huge suicide prevention fundraiser.

The idea started with Bro, What in Actual Tarnation (BWIAT). Having made a bunch of “wholesome” suicide awareness posts in the past and receiving a huge amount of support, they started to fiddle around with something bigger. They said they “picked suicide prevention because a lot of people within the community have been through rough times, lots of us have dealt with people that have had these problems and we felt that it was the most uniting charity”. Having had Mike King visit their school last year, the group chose the charity I AM HOPE.

The whole concept took about a week and a half to form, BWIAT got in contact with I AM HOPE, and then from there started to message the other pages. These guys were all Internet friends, much like all of my Club Penguin boyfriends, and together they formed a plan. Like most plans these days, this one consisted of a heartwarming Givealittle page.

The pages they got on board were: “Registered Flex Offender”, “Brett Lee Yelling Howzaaaaat”, “Seshbob Gremlinpants”, “Could Be Keen”, “Thotmin and Co”, “Yea The Hecken Girls”, “Beta Male Hangout Arena”, “The Boys Are What”, “Ketamemes For Drugged Up Teens”, “Tiger Woods Smashing Coke” and “Thanks, it’s the bpd” among others, which adds up to more than 243,000 total page likes. Honestly, at times I wasn’t sure what was a page name and what was me having a spontaneous seizure. Gen Zs are chaotic good.

Together, the pages promoted the Givealittle page with eye-watering benefits along the way for reaching certain donation milestones. These benefits include yardies, face reveals, mullets, blue hair dye and nipple piercings. Within three hours, the Givealittle had already racked up around $3000. At the time of print, the page had reached more than $5,200 donated by 342 donors.

The Boys Are What told Critic: “It’s so heartwarming aye, seeing all these lads commenting, donating and showing some emotion, it’s the kind of change we want to see.” The boys did a face reveal at $2,500 which “took an embarrassingly long time to choose one we both agreed on”. At the end of the interview, I asked my usual “any other comments?” They asked for my Snapchat. I love lad culture.

At $3500, Beta Male Hangout is expected to get a mullet. An admin told us: “I've never had a mullet before but since moving to Southland and seeing the beautiful mullet culture down here I'm keen to get on board, especially for a good cause.” It’s nice that Southland can have a positive impact on people. Personally, I’m excited for the promise of a nipple piercing when $15,000 is raised.

Nipple piercings aside, lad culture (or shall I say party culture as not to offend Yea The Hecken Girls) can often be a limiting space to talk about issues such as depression. In a culture that circles around having a good night out, you often don’t want to be that person that ruins the sesh by talking about some personal shit. It’s also a space deeply occupied by mood-changing drugs such as alcohol, weed and MDMA. If your friend is a bit sad, who's to say that he’s not just on a comedown from the molly you snorted in the back of Suburbia? Most of all, it’s just straight up hard to talk about your feelings - lad culture or not.

I AM HOPE offers free mental health counseling to kids and does a range of talks around schools to raise awareness and support for mental health issues. They mostly deal with high schoolers but are looking to expand their services to 20 to 25-year-olds.

To the pages behind the fundraiser, it’s not just about raising money, but also having a conversation. As the Givealittle explains: “There are ways that we can help people who are fighting these thoughts. And the main one is talking. Tell someone you trust what you are going through. See a therapist or other trained professional if you feel the need. Flick our pages a message, behind each page is a person just like you.”

If you want to donate, head to https://givealittle.co.nz/fundraiser/nz-shitposting-suicide-prevention-campaign