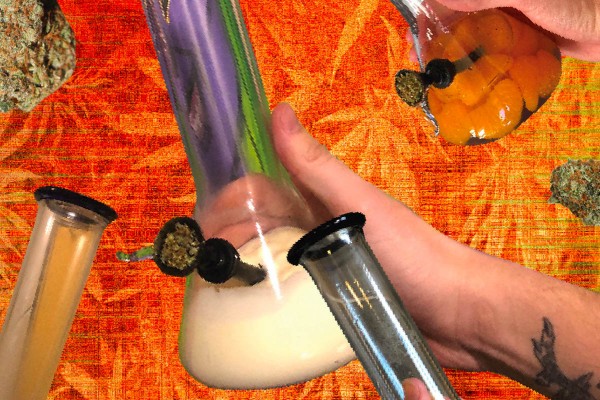 I tried to rip bongs through household ingedients: A heartwarming tale of overcoming oppression

Why are we still exclusively ripping bongs through water when there’s a whole world of exotic bong rips out there. Here’re some of the hottest new bong trends for when you feel like spicing your life up:

Difficulty: The white part of a mandarin is objectively the worst ‘food’ part of the mandarin, nasty. Ripping cones through them felt like reparations for childhood trauma. 2/10.

Viscosity: I recommend pulling slowly because these orange jiggly disappointment slices shake like a Wellington aftershock. Still had liquid, syrup was thicc tho. 2/10.

Post-cone flavour: They tasted like ash tbh, but as a Dunedin breatha who only eats beer and ass, this made me feel pretty healthy. 9/10.

Difficulty: Pulling hard through whole eggs made gross eggy bubbles which took a while to pop, so low effort/reward ratio initially. But if you pull hard enough it breaks the yolks and beats the eggs and, for whatever reason, this makes the bubbles stop, allowing premium rewards to your dome in exchange for literally just breathing. Mean. 7/10.

Post-cone flavour: I tipped them straight out of my bong into a hot pan to make a fucking fat omelette. It cured my hangover, murdered my seasonal depression, and is probably the most substantial breakfast I’ve had in the last 6-8 months. 10/10.

Difficulty: I think the hardest part about this was sliding dead fish into my bong. Their sad little faces looked up at me, a disappointed look in their eyes that I’ve only ever seen from my parents (and once from an eager hookup after a hard night out on the gear). Getting it all back out afterwards was pretty rough too. Basically I vorteked them out for ease of removal stress, breatha training finally paying off. 9/10.

Viscosity: Well let me fucking tell you, this shit has bones in it. I slid the fish in whole, but while I was pulling, the bubbles kind of mashed it all together into a fleshy pulp. Who needs a NutriBullet when y’all have me? Same consistency as vomiting up half a Butter Chicken and 8 Billy Mavs™, mean. 9/10.

Post-cone flavour: I ate one tablespoon of lukewarm dead fish mush and called it a day. Astonished that people call this ‘food’. 1/10.

Difficulty: Okay, so my dumb ass didn’t think to only use the sauce. I tipped all the chicken chunks in, too. You ever seen those nature documentaries where the momma bird coughs up some nasty looking ‘food’ for its baby? Yeah well, that's me; I was both the momma and the chick. Pelican’d myself. 6.9/10.

Viscosity: Pulling through this is like blowing bubbles into yoghurt with a straw. Thicc, but not too hard. 7/10.

Post-cone flavour: It made the chicken taste kind of smokey, I guess that was...the smoke? This was actually my dinner tonight so I wasn’t too phased, but I definitely should’ve used gauze to stop weed ash falling into my food (again). 9.8/10.

Difficulty: I completely forgot that boiling water is the natural enemy of glass. Post-cone I panicked and yeeted all of it back out, but all the noods went with it. Ripping cones through hot water is like hooking up with your flatmate; really hot at the time but a terrible idea in the long run. 5/10.

Viscosity: Cheap noodles have a lot of fat. Hot, fat water is fucking gross. Comparable to pulling through liposuction leftovers. 6/10.

Post-cone flavour: Noods smelt fucking awful because yet again I did not use gauze and a fair bit of ash was delivered straight to my snacc. Metallic aftertaste, probably because I dropped them in the sink. 4/10.

Honestly, this whole process has made me clean my bong every day and that’s probably the only good thing about it. I aimed for cheap stuff to use but I’d be keen for some more unconventional materials, Hit Tinder hard and get a bong full of nut? Maybe I’ll start a GoFundMe or something who knows. Watch this space.