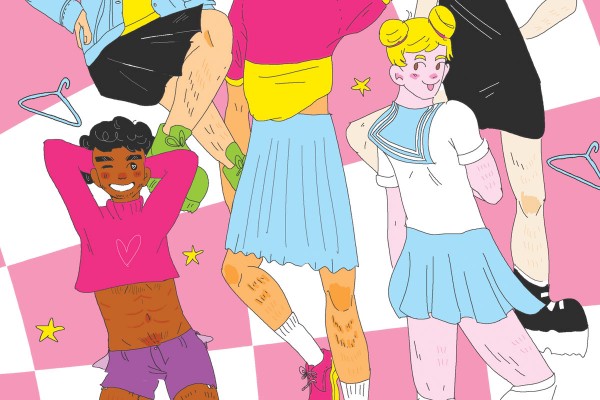 OPINION: Let a Man Walk Through Uni in Cowboy Boots and a Tank Top in Peace

Whether it be a pair of cowboy boots or a shirt with seven sleeves (a tad excessive possibly), since I started uni I have gradually descended further and further into the black hole of fashion. At this point, the more outlandish the better. Now some might label this as ‘a cry for attention’ or ‘try hard’, but in its rawest sense it is nothing but a true expression of my personality. Fashion is the first (and in many cases the only) impression you leave on others as you pass them on campus.

Which makes it frustrating that at a university where we pride ourselves on being a diverse and accepting student populous, I still get heckled for what I wear every second day.

Now I am not going to make false assumptions about what it’s like for everyone on campus, but I’m a straight white guy who just wants to wear the clothes he likes in peace. I didn’t always dress ‘well’. Dig around in the photo albums (embarrassingly not that far) and you can find a stack of photos of me in some grubby old hoodie and Hallensteins chinos that were easily three sizes too big. Come first year though, a chocca-block St Daves packed edge to edge with beautiful people, I realised something had to change. I started to care about the things I was wearing, thinking about what loafers to pair with what blazer (yeah I was that guy) and what satchel to pretend I had notes in. This sparked something; a deep interest that is now a key part of my identity. With this has come some bold choices in clothing. I’ll be the first to say some of these choices have been, well, shit. But they were my choices. Choices I don’t expect to be criticised by others - particularly not in a way that looks for a course to violence, homophobia or stereotypes. This is EXACTLY what I have got. Week in, week out, religiously for the last three years.

Just this weekend on my way to work, I was wearing a black kilt and a bomber jacket; some weird mash-up of Braveheart meets Led Zeppelin and I was feeling it. A white van, stacked deep with lads and Chads stops alongside me and proceeds to hurl abuse. Now I’ve got thick skin; you don’t dress the way I do and not prepare yourself for that kind of thing, but the whole point is that you really shouldn’t have to. Many of you will say ‘oh, it’s only that kind of guy that would do that’, and in many cases you’d be right. But I’ve had it in the neck from everyone, not just your classic geared up breather or slab deep tradie. It isn’t always the threat of a fight, being told to kill yourself or one of a long list of shrewd, ill-mannered labels, mostly targeted at sexuality (clever right?).  It comes even from people you wouldn’t expect: the person you are interested in, a friend or a staff member. “I assumed you were gay.” “Why on earth are you wearing that?” “You must just love the attention.” Everyone tries to infer something, project the way you dress beyond the fact that you are COMFORTABLE in what you wear and that YOU think what you are wearing is cool as shit.

That’s what pisses me off about men’s fashion down here in the dirty South; nothing to do with a lack of shopping options or places to take sick photos for the gram (@oscar.charles.german x), but the underlying level of intolerance that seems to exist. I couldn’t care less what you are wearing; if that’s what you want to wear then bloody go for it. But don’t project your own insecurities or misguided opinions upon someone else. If you don’t like what someone is wearing then it’s bloody good you don’t have to wear it. Hold your tongue. Let a man walk through uni in cowboy boots and a tank top in peace.