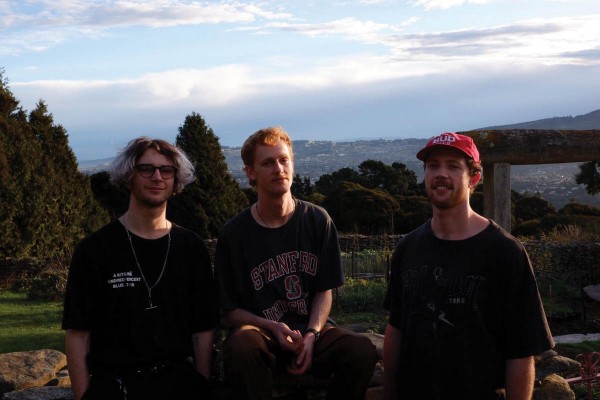 What does a vape store retail manager, bean soup merchant, and bouncy castle coordinator all have in common? They all share being local pesticide enthusiasts and members of the self-described “conspiracy punk safe kids” band Flyspray. Comprised of Jack Doublet on lead vocals and guitar, Peter Molteno on bass and production, and Tom Schultz on drums.

Flyspray’s formation was not intentional. The band formed as a result of Peter and Jack recording a few demos at Peter’s studio late last year and became Flyspray following the recording of their first single Pay You On Monday. After recording as a two-piece, Tom joined the band after “Peter came into Shosha and asked ‘hey, do you want to bang on some drums?’ and I thought why not”. Each member of the band comes from different musical backgrounds, bringing a unique flavour to Flyspray’s sound. Jack’s love for psychedelic rock, Peter’s background in metal and prog rock, and Tom’s years of Scottish pipe band sneer drummer and jazz experience all create the “dense but slightly moist to the bite” Flyspray sound. “We have a dynamic range between light and heavy sounds,” Peter said. “We play heavy prog rock for people to thrash too, but still maintain an accessible aesthetic for people to enjoy.”

“Our sound is a nice amalgamation of all of our different tastes and skills.”

The band has been hard at work for the past seven months, playing a range of live shows and releasing their first EP StormBrain on June 17. Each song has a distinct and different sound; with the likes of Pay You On Monday revolving around borrowing money from your mates to buy a gram, to New Mercedes being about Jack’s experience working at a Poultry farm over the summer. Creating such a dynamic range of work was no easy feat for the band.  The EP was formed in the space of a week but went through rigorous refining before being released. “I think I remixed the whole thing twice; each individual song went through many iterations. They’re all good songs and we evolved faster. We tried to find our footing sonically but there was a point where we just wanted to get it out there,” said Peter. The response from the EP was overwhelming, with Tom describing how “When [we] saw Flyspray on the Radio One Top 11 chart, that’s when it actually felt real”.

After playing their biggest event at Health Sci Flyspray at Starters Bar at the end of the semester, they’re now working hard tearing up the local gig scene. As Jack describes it, “My favorite brand of Flyspray is Mortein, because we bring the Raid in our stage presence every time we perform”.

“It’s fun playing such heavy shit but seeing everyone having a good time and getting responsibility aggravated at our gigs,” Tom said. Alongside a range of gigs coming up in the near future, the band is planning on releasing a small three-song EP sometime soon, and a fully-fledged album before the end of the year. “The album is on a backseat, trying to chill out, just need to write lyrics,” Jack said. For now, the band is still marinating in their flavor of an “overcooked chicken wing covered in lime and chili that’s been sitting at Willowbank all day – but it hits the spot just right. Just remember to stay safe, drink lots of water, and pay your ticks on Monday.”

You can stream StormBrain on all available streaming services, and keep up to date with Flyspray on Facebook and Instagram @flyspray_