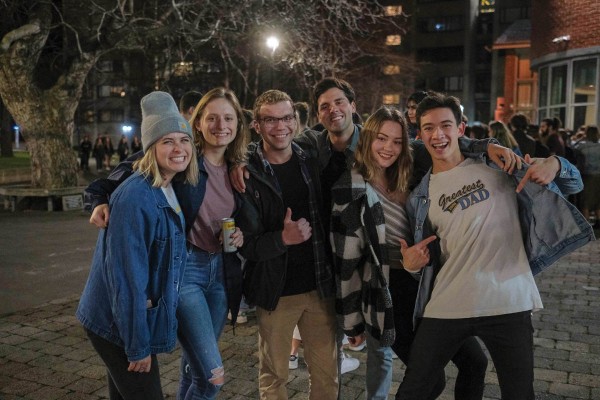 Critic interrogates drunk students in the line for Pint Night with pretentious questions about the Dunedin Sound because we’re not like other boys and Pint Night is a bit shit.

What is your favourite Dunedin Sound band?

“Hold up, I’ll think of it. Three Quarter Marathon”

“Oi nah my flatmates a DJ he drops a mean set”

“Anything Drum and Bass”

“I fucking love The Shitz aye”

What are your thoughts on the new version of the Dunedin Sound? Do you find the Sound now to be derivative or distinctive?

“Grungy, but there is the surf rock side that I don’t like”

“Can you get me on the blind date?”

What are your thoughts on the increasing closure of iconic gig venues such as Chick’s and The Attic?

“I thought Chick’s was a strip club”

“Sucks man. We were jamming there today, and it sucks because we can’t perform there”

“Chicks was so sick; I really miss that place”

“It makes me sad, I think we need more places to go have fun as young poor students so there’s a bit of solidarity”

As you are probably aware, the Dunedin Sound was conceptualised within the wave of music coming out of Dunedin in the 1980s with the likes of The Chills, The Clean and Straightjacket Fitz – what current Dunedin Sound band do you think best encompasses that style of sound?

“All I can think of is Crazy Frog”

What do you think of surf rock in Dunedin? Can surf rock be classified as ‘the Dunedin sound’?

Why are you at Pint Night tonight?

“Girls, the kids are out to perform”

“My flatmate’s tits are out, we’re out here to pull – WAIT WHY ARE YOU WEARING MY BRA”

“My flatmate is playing”

“We just wanted to have a flat outing”

“Wanted to spin some fire”