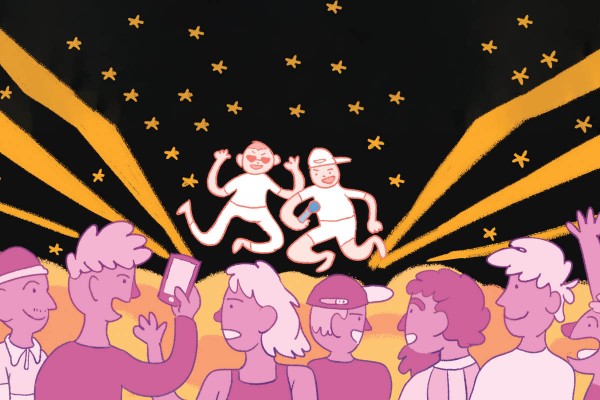 Sachi, named for that noise where you try and say ‘sup’ but end up sneezing, are an Auckland-based duo who have mastered melding groovy synth melodies with upbeat vocals. Possibly not the right concert for someone as old as me, which was a feeling validated once I found out Sachi are a year younger than me.

The DJs to open were local legends Melt, one half of which is best known as that f*** that tried hacking Critic. Montell2099 followed them up with some harder hitting, meatier beats, backed up with some anime-inspired imagery on the display behind him. The sound and lighting were smashing, thanks to a completely satisfactory Christchurch-based road crew.

Sachi rocked on to stage around 11:30, decked out in some space-age all-white clothing. The audience was on their best behaviour when Worst Behaviour was cranked out; Teenage Craze put them in a Teenage Craze, and Sparking My Fire was accompanied with some pyrotechnics along the front of the stage (there, that’s my quota of song based wordplay).

How was the crowd? A bit more fresher-cum-breather than I would have liked (Editor’s note: that means fresher AND breather). A quick glance around the crowd showed some familiar facial expressions – some people a bit too 🥴, plenty of 😬, and the poor bastard that 🤮 right in the foyer. Outdoors was a pleasant scene, where one could chuff a dart and be entertained by the Fire and Circus Club. Forgot your lighter? You’ve come to the right place.

All up, a solid gig which provided a nice ‘welcome home’ present to start Re-Orientation with.

Critic didn’t send a reporter to this gig. Nonetheless, we could hear it pretty clearly from the office. It was loud. Hope you wore earplugs. FOMO aside, this would have been a stunning gig for any substance aficionados out there.

T>i is probably named after the American rapper T.I., best known for the 2008 hit Live Your Life featuring Rihanna. Unfortunately, this makes using Google to gather article facts kind of difficult. He’s from Norwich. Norwich is a town which rhymes with Sandwich. T>i's set was nicely sandwiched between the opening acts (a back to back set with DC and Switch, followed by Dislocate), followed by the closing act (Zoombox). Zoombox finished off by doing a shoey. The shoey was well executed.

While most of T>i's discography on Spotify sounds like dank edits from the sounds of a dial up modem (fuck, am I that old?), the set at Catacombs was dirty enough to fit in at Castle Street on a Saturday night. The crowd wasn’t too dense, which I thought was an improvement over the normal ‘wall of flesh’ feeling I expect from Catacombs. More audience interaction that way. The audience took on a slightly animalistic theme; I joined in with a few girls howling like wolves, one person had unhinged their jaw like a python, and my personal favourite would have been the guy walking the dinosaur while only semi-conscious.

Other gigs coming up which could be worth a geeze are Technimatic at Catacombs this Thursday (more liquid and flowy over face-melting chonks), and Document One at Starters on Thursday August 1 (quite chonky).