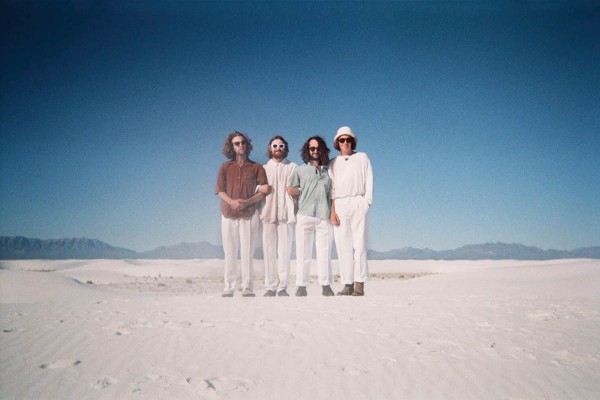 When Oscar was a kid, he bumped ‘90s hip-hop. He ran on the sidewalks of St. Albans in Christchurch. Now, he’s in a band with three of his mates. You might’ve heard of them - Soaked Oats. Soaked Oats are the brains behind songs like “Avocado Aficionado” and “Driftworld”. Max Holmes (bass) Conor Feehy (drums) and Henry Francis (guitar) play alongside our main man, Oscar Mein (vocals, guitar). The Oats vibe is a friendly, sometimes goofy, often psychedelic one, self-described as ‘sludge-pop,’ which is somehow both very descriptive and an oxymoron.

I phoned Oscar at 2:18. I was three minutes late. I told him I was running behind, and he sent me two thumbs up emojis in response, so we were off to a good start. “Let’s get right to it,” I said, “and I’m just gonna skip the routine shit. I can tell there’s already about a dozen articles on who you are and where you come from and what music ‘means’ to you”. Oscar replies “Thank God”. In the background, it sounded like he was making lunch. I wondered if he was making soaked oats. I didn’t ask.

He says that lyrics are at the centre of Soaked Oats. This made sense; Oscar speaks lyrically. He says that songs are the meeting point of poetry and music, and that the lyrics have always been a really important thing for him. He told me to check out the poet Philip Levine and his poem ‘What Work Is’. Earlier, I’d asked if Soaked Oats wanted to stay small and intimate, or go for the big time. Oscar replied that while intimate gigs are the most rewarding, big gigs get the bills paid – “someone’s gotta keep petrol in the tour van”.

He said that the artist he’d most like to see live was MF Doom play “in a basement somewhere. And I’d want it to be sweaty as hell.”  “Or maybe Bob Dylan”. He paused. “Yeah, Bob Dylan in one of his theaters, and I’d want him to be up there, just angry, angry on his guitar.” I was thinking about how Soaked Oats wrote an entire album around stone fruit. I realized Oscar was waiting for me to say something on the phone.

“Yeah, we might’ve started off too strong with the specific albums there”, he adds, “now we’re starting to get more and more vague”. I agreed. Speaking of vague and uncanny, I told him that their “Driftworld” music video looked and felt like a bad trip. I said that if I was tripping and that video came on, I’d have to close my eyes. Oscar chuckled. “Yeah, that’s pretty much what we were going for.” You can thank videographer Jake Munro for that pseudo-psychedelic experience. The “Driftworld” video shows scenes of the band’s U.S. tour - Oscar says he’s “fascinated” by the United States. He had ended up there years earlier, before the Driftworld tour, under different circumstances. He’d wanted to escape New Zealand after uni, which he says is not at all uncommon for those living “in the very bottom right corner of the map”. “I dreamt of leaving NZ; I was pining for it.”

I wanted to know more about this feeling: did he feel trapped in New Zealand as a kid? Had he always dreamt of the big stage, flashing lights? Did he feel destined for stardom? “Oh, nah,” Oscar quipped back, in a lapse of his usual lyricism, “fuck that shit”. I asked why he’d come back to Zealand after finally escaping. Surely the U.S. tour was something of a ‘golden ticket’ out. He told me that after all his wandering, a lesson he’s taken away is that you don’t need to leave anywhere to escape it; “you can find little bits of escape every day”.

Oscar and the Oats have cultivated an organic and original sound. Their gigs garner a feeling of intimacy, no matter the size, and the future seems bright for the young Kiwis. This summer, they’re not doing a massive tour, just gigs here and there. Two EP’s are available: “Stone Fruit Melodies” and “No Slip-Ups”. Give ‘em a listen if you haven’t already.

Get in before these guys get big, because the Soaked Oats are on the ups.