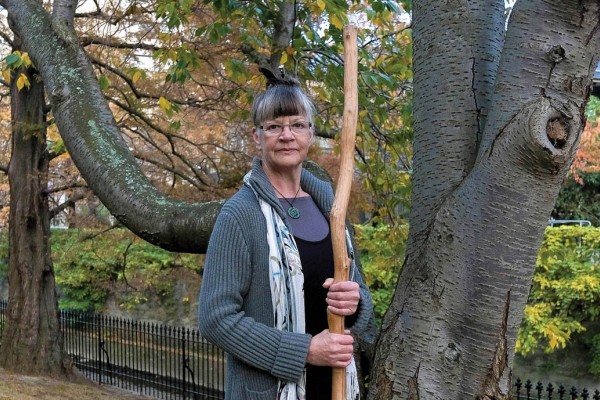 “She is the only spaceship that we have to travel through the universe.”

Organised religion is fine, but you have to admit it’s clingy. There’s a lot of reading, a church with real walls (as opposed to a circle of salt on the ground), and convoluted hierarchies of people who tell you what to think.

In contrast, Tracey Crampton Smith is the University’s Pagan chaplain.

Of the students she supports, some contact her with their own Pagan practices as diviners or druids or wiccans, which they bring with them while they study. Others just have some kind of sympathy to the core of Paganism. “They have conversations within their inner landscape that reflect those philosophies and ideologies.”

The centre of Pagan philosophy is looking outward at nature to discover your inner spiritual awareness. That process is different for every individual. “The journey of spiritual awareness spirals inwards in nature,” said Tracey. Cycles are important to the philosophy: the rotation of the earth, the lunar cycle, the menstrual cycle, the seasons, and the human life cycle. Another key part of Paganism is honouring the Earth. “It’s a relationship centred around the body of the Earth,” she said. “We have to respect and honour the organic nature of her life.”

The University’s Pagan community try to meet monthly, but often it’s less frequent than that. “The best thing we can do is mark the seasons; the four seasonal changes in the year,” Tracey told me. The seasons are distinct in Dunedin. “We have a direct relationship with the seasonal wheel.” Tracey helped found the Dunedin Midwinter Carnival in 1997 to assist others to celebrate those seasonal changes. It’s been popular, she believes, because everyone feels the impact of the seasons here.

The current season (Autumn) is a time for quiet reflection. This is where “we mature our inner thoughts and allow things to fall away before we go into the stillness of early winter.”

“We’ve seen the colours of the leaves and we’ve seen them fall away, which is symbolic of the time of Samhain.” Samhain is Halloween, the celebration that honours the beginning of the deathing time of Autumn/early Winter. Apparently, New Zealanders who celebrate Halloween in October are wrong, as are the people who celebrate Easter in March. Pagan holidays from the Northern Hemisphere should be reversed in New Zealand. “You should follow the seasons of the piece of land you’re standing on.”

When the Pagan community meet, they gather in circle. Tracey told me that this is because in a circle everyone is on the same level. It’s equitable. They “cast a circle and create a boundary”. This could involve candles or objects or salt or even just energy. The circle “invites the intent to come in and work with you in the process of enhancing what it is you want to do in that sacred space.” She sees this process as similar to a church service. Instead of the walls of a church, you have a circle. Instead of prayers, you cast a spell.

There are a lot of misconceptions about Paganism, Tracey tells me. People think that Pagans worship the Devil, or that they are cursing people, when really they’re mostly pacifists.

But Paganism existed prior to Christianity or any of the other Abrahamic religions. Christian imagery of the Devil and Hell was stolen from Pagan beliefs. “You demonise nature [when you] bring it into the building and house it in a church.”

Witchcraft, on the other hand, is a key branch of Paganism. Tracey tells me that the witches from Macbeth are a pretty good representation of Paganism. “Forget eye of newt and leg of toad, the symbology of it is very much there.” The three women represent the maiden, mother, and crone. That’s the female life cycle, which is central Pagan philosophy. “The witches were wise practitioners […] they were telling someone the future and how they could then take responsibility for their own actions.”

Seeing into the future, like Macbeth’s witches, is a skill that some Pagans practise. Everyone divines differently, Tracey told me. “You might scry, you might look into a pool of water, you might gaze into a crystal ball, you might use cards. Then again, you might just use a meditative process which allows you to speak it or write it.”

Some people create tinctures, others will chant or connect with nature. “You can use the energy of the waxing moon, the full moon, the waning moon, or the dark moon, to do whatever you want.” So, just the moon in general at any time. The main thing is the focus of the mind, and having your intention clear. Although there are magic correlations with particular objects, “stones and crystals and herbs and trees have specific alignments energetically”.

Tracey thinks that a lot of people who work with others, or with the environment, probably subscribe to some forms of Pagan belief without realising it. “As human beings, we have relationships with the climate, the Earth, the seasons. We have responsibilities with respect to that as well.” Paganism believes in that reciprocal relationship, so it is often linked to environmental movements. “We are upsetting certain aspects of our world and it is not okay to do that. She is a body, an organic life.”

“We need to counter the separation that industrialisation has created.” Tracey thinks that by eliminating the separation between nature and ourselves we can begin to treat the Earth with reverence and respect again. “She is the only spaceship that we have to travel through the universe.”

Paganism can be whatever you want, from advanced witchcraft to just helping other people. “There isn’t a church that gives you a defined notion, there’s no book that you follow,” Tracey said. “It’s a journey of self-exploration.” It’s like the best kind of no strings attached relationship, one that’s all about making you happy and fitting in with your life, but not relying on you for anything. Paganism will not hand out pamphlets or try to convert you or get you involved in a religious pyramid scheme.

It doesn’t need to. It has magic.