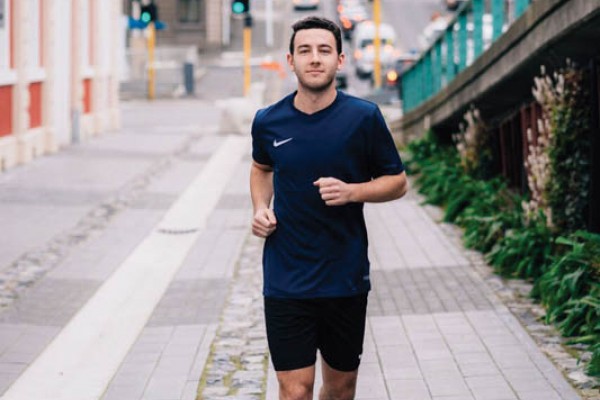 In June last year, Aidan Barbour-Ryan set himself a personal challenge to run every day for a year. One month in, the 21-year-old marketing student decided that his challenge could benefit more people than just himself. Aidan decided that he would raise money to increase mental health and suicide awareness through Dunedin charity, Life Matters Suicide Prevention Trust. On the 349th day of his challenge, Aidan sat down to speak with Critic about his journey.

“I don’t even know how I stumbled across it,” Aidan said. “I was on YouTube, maybe I was bored and got onto that weird side of Youtube. I saw someone who had finished the full 365 days who said he always considered himself an athlete. I’ve played sport my whole life so I thought it would be a good challenge to see how fit I actually am.”

Aidan gave himself a trial period to see how he would go; “I did a week which was awesome because I hate running. I love playing sport, it’s social, but doing it by yourself can be a bit tedious.” The week turned into two and soon enough it had been a month. He thought he might as well stick it out for the full 365 days.

Aidan said he thought about raising money for a lot of different charities but decided on Life Matters Suicide Prevention Trust after consulting with some family and friends. “Mental health comes hand in hand with exercise, so I got in touch with Life Matters and they were really happy for me to do something with them.”

Life Matters are a local charity founded to help members of the Otago community who are at risk of or are affected by suicide. They aim to reduce rates of suicide in the community through raising awareness, reducing stigma, promoting prevention strategies and providing community education and bereavement support. So far Aidan has managed to raise over $2000 for the cause via a Givealittle page.

“I never thought I’d get here, now I’m 18 days out,” said Aidan. Reflecting on his challenge so far, he admitted that the experience has had its ups and downs. “I go through spikes where I really enjoy it and then other times all I want is a day off,” he said. When asked about some of the more challenging moments, Aidan admitted, “there have been stints where I haven't looked after my body the best. New Years was probably the lowest point of my running. That was mentally extremely tough particularly in the heat of Gisborne at RnV. It’s all part of it, I guess.” Setting himself a minimum of 2km a day, with his longest being a half marathon, Aidan says he’ll aim for a 25-30k run for the final day.

When asked what he’ll do once he reaches his 365-day goal, he said, “I’ve thought about carrying on for a bit. I’ve pushed myself through some horrible phases. There isn’t really much that could stop me from running now.”

Aidan keeps sponsors up to date with his Instagram, run365forlife, posting updates of kilometres, run tracks, alongside some of the challenges he’s encountered on his journey. You can follow his progress on @run365forlife or donate to Life Matters via his Givealittle page, Run365ForLife.