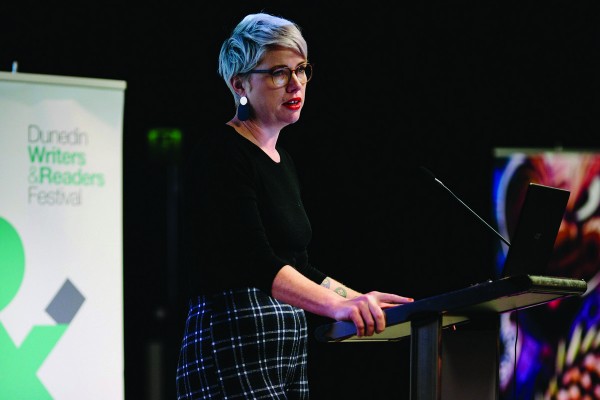 Fish and Chips and Feminism with Clementine Ford

Clementine Ford is cool. During our Sunday afternoon interview, the feminist writer ordered fish and chips, gave me all of the chips, and offered me wine twice.

We launch right into rape culture on university campuses. “It’s always existed and people will try as hard as they can to pretend that it doesn’t,” she said. “People continue to nurture a culture in which young men are supported to do whatever they want at the expense of young women.” What that means, to Clementine, is that we need to change the way we think about sex. Conversations about consent should be “evolving and ongoing” throughout our lives. “Any campus that truly believes in the welfare of their students will be proactive in initiating and leading those conversations,” she said. “If they’re not, basically what they’re saying is that they don’t care about the welfare of all of their students.”

If institutions are not leading that change, students need to. But how? “It’s really, really hard, whenever you’re trying [to] battle any opposition to cultural change, to stare down the people who are the loudest about maintaining the system,” she said. She gave a loud sigh when I asked about aggressive opposition to feminism. “It’s demoralising to be told by people who don’t know what the fuck they’re talking about that you’re wrong. Having some kind of solidarity and strength in the face of that is essential.”

“Social change just happens very slowly,” she said. “But I think more and more people are interested in having these conversations.” Focusing on the progress that has been made is important to her. “The whole landscape of language has changed,” she said. “Even from ten years ago.”

People now know words like triggered, patriarchy, woke. Even when those words are used to mock social progress, Clementine believes that their presence show that the conversation has moved forward. “Even when young men mock the idea of being triggered, they’re still aware of the concept that certain content will provoke a triggering response in people,” she said, going on to say that it’s irrelevant whether or not they agree with the idea. The fact that they’re using the language means that it is accepted, it’s mainstream, and other people will hear it and “feel suddenly relieved that there’s a language that they can place to their experiences”.

In her eyes, just the fact that people are reacting to her words shows their power. A lot of the angry men she encounters claim that “no one gives a shit about feminism anymore”. “If no one cares about what we’re doing, then we shouldn’t be bothering you that much,” she said. “Their very opposition dispels what it is they’re trying to say.”

Men’s rights activists have a special hatred for Clementine Ford. There was a MRA protest planned outside of her talks in the Octagon. It didn’t go ahead (much to everyone’s disappointment). Clementine told me that despite the annoying security risk, the MRA probably undermined their own agenda. The security guard hired to monitor the protest listened to all of her talks. “They inadvertently exposed one security guard to a feminist education and he really appreciated it,” she said. It’s possible that the Dunedin protest was concocted online by the same people that had earlier tried to keep her out of New Zealand with a petition.

She told me the MRAs need to update their insults. They’re mostly things like “no one wants to fuck you”, “you just need a good root”, or “you’re a fat cunt”. But she’s become desensitised. “Being called a fat cunt doesn’t hurt me the way it used to.” Besides, it doesn’t matter what you look like if you speak out about feminism. “By their logic, men don’t want to have sex with conventionally beautiful, conventionally sized, amazing-looking women, if those women have a fucking gob on them.” And, as she points out, ‘a good root’ has nothing on a sex toy. “Who needs a good root when you’ve got a good vibrator? It’s like, I’m sorry, does your dick vibrate, and do a dual action on my clit at the same time?”

The purpose of these insults is to disempower women who speak out. But that same purpose makes the insults easy to disregard. “It’s about going, does my power lie in my ability to use my own voice and to be a fully realised human being in this world? Or, does my power lie in men validating my existence, and me having to toe the line to make sure they never withdraw that validation?”

“So, it’s quite an easy choice at that point?” I asked.