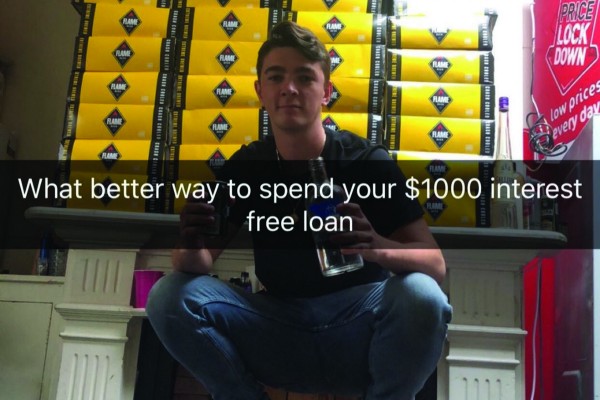 Flameboi: the Legend, the Lie

Hailed as New Zealander of the Year by Critic Booze Reviews, Flameboi rose to fame through spending $1,000 of his course-related costs on Flame beer. I caught up with the man, the myth, the legend himself, only to discover that his story was in fact an elaborate ploy. A Flameploi by Flameboi, if you will.

Getting in touch with Flameboi proved difficult. After bursting onto the scene with his infamous Flame drinking antics, I thought he’d be in desperate search of some Critic clout. Turns out that wasn’t the case. Possessing all the elusiveness and Southern charm of the Canterbury Cat and Fiordland Moose, Flameboi is also a massive fucking hoax. After ghosting my messages for an entire month, he finally agreed to meet and tell me his story.

It was early February, Flameboi was shacked up on Hyde Street with mates until his flatmates arrived. Leith Liquor had a deal going with 2 boxes of Flame for $40. “It’s hard to deny a student that,” Flameboi said. Taking advantage of the deal, Flameboi went out and bought 52 boxes of Flame. That's 780 cans of Flame and 1,092 standard drinks, for anyone wondering. When asked if he would have chosen any other bevvy, Flameboi said he only drinks Flame or whiskey. “Flame is cheap, it’s durable, and it’s a lot of standards for a low price.”

All was going well until Flameboi professed that our meeting was “less of an interview and more of a confession.” WTF? Flameboi began, “how do I word this… it was a joint effort between myself and the flat on Hyde Street. I only bought 6 or 7 boxes.” He didn’t even buy them in one go, saying he “bought 4 in one week, and then two the next, just to get me through O-week and Flo-week.” Now I’m no mathematics expert but that's 14 days, meaning about 6 and a half beers a day on average. Weak. When asked if he purchased them with his course-related costs, as per his initial claim, he said, “nah… I bought them with my own money”.

Shocked, hurt and confused, I asked Flameboi how the story of him spending the entirety of his course-related costs on Flame even came about. He said, “I started it. I remember I was drunk in the flat and reading the Critic and saw the snaps of the week. I thought to myself, man, I’d really like a slab of Vs.” When his mates at the Hyde Street flat attempted to clean the place, they decided to stack all their empties on the mantelpiece (breatha flat decor 101).  “I tried to think of the funniest thing I could do to get everyone free drinks, so I posed in front of the Flame wall. I got one of the boys to take a photo and sent it in.”

Flameboi’s attempt to get a free slab of V from Critic did not work. In the words of Flameboi “instead it all blew out of proportion.” When Critic Booze Reviews posted the picture to their Facebook page, Flameboi garnered a massive 5.5k reactions, 4.5k comments and 377 shares. Flameboi said he “enjoyed the time in the limelight”, but that none of the boys from Hyde were very happy with him, “I think ‘stolen valour’ were the words that they used”.

Only occasionally now does Flameboi get recognised in public; these days Flameboi prefers to live in the shadows, and to study geography and environmental management. Flameboi said there are definitely no Flame beers left in the flat and that he “surprisingly doesn’t drink as much as he used to”, now considering himself a “serious uni student”.

What can I say; you should never meet your heroes.