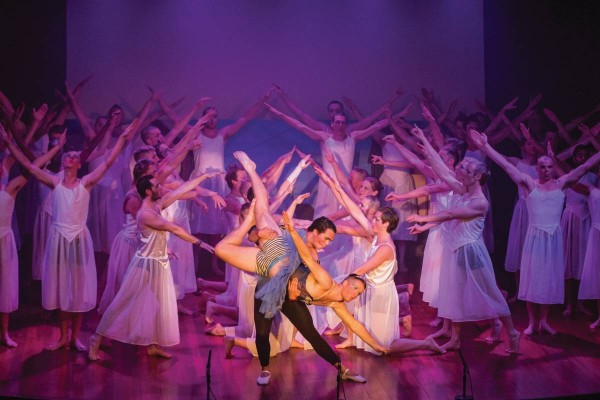 Can we all just admit that the Selwyn Ballet sucks?

At the 2019 Capping Show, the Selwyn Ballet will take to the stage for its 91st year. This year’s troupe got a warm-up on a big stage, performing for Forsyth Barr Stadium at the Highlanders game last week.

See, the joke, if you didn’t get it, is that they are boys, except instead of wearing normal boy clothes, they’re wearing dresses. And they’re dancing to ballet! What a silly thing for a man to do!

That’s it. The joke hasn’t changed since 1928. It’s boys, in dresses. Which, of course, boys are never supposed to wear.

Is the dance funny? No, not unless they fuck it up. It’s just a ballet. Does it form part of a relevant sketch? Also no, it’s just a dance. There is only one joke: boys, wearing dresses.

The joke isn’t mean spirited. It’s not targeted at anyone; it’s meant to be a self-mockery by the boys wearing the dresses, because they look silly.

But the subtext of the joke is still there: that anyone who doesn’t fit with traditional gender norms is ridiculous.

Obviously humour is subjective. Some people really like the Selwyn Ballet. Also, Adam Sandler’s Jack and Jill made $150 million at the box office.

It’s an open secret that the Capping Show directors and writers aren’t fans of the ballet. There’s been numerous issues in recent years with ballet boys causing a disturbance backstage, harassing cast and crew, and even a couple years ago hitting the big red ‘shut down’ button in the middle of the show.

But the simple truth is that if the Selwyn Ballet were pitched today, there’s no way it would ever make the cut.

Please imagine this scene, set in a Capping Show writer’s room. Perform it out loud if you wish:

Writer: Hey boss, I’ve got an idea for a skit.

Director: Oh boy I can’t wait to hear it. Please tell me more.

Writer: Alright, so we get some boys, and we put them in booty shorts and crop tops.

Director: Cool cool, and what to they do?

Writer: Well, we play some Cardi B, and they drop to the ground and twerk.

Director: Are they good at it?

Director: Right. Then what happens?

Writer: They keep doing it.

Director: For how long?

Director: Is it a pun? Like ‘Men at Twerk’ or something?

Writer: I don’t think you get it. They’re BOYS. And they’re TWERKING.

Director: No, I get that bit.

Writer: Twerking is a thing that girls do.

No Capping Director in their right mind would allow that skit into the show. Because it relies on out-dated, regressive gender norms to make a pretty shit joke (if that even counts as a joke).

Yet that’s exactly what the Selwyn Ballet is.

The only reason the Selwyn Ballet has survived this long is because it’s tradition. No one wants to be the one to cancel something so old.

But being old isn’t a good enough reason to keep something around forever. As with all our historical traditions, at a certain point we have to ask: does this still have value?

I performed in the Selwyn Ballet 2013, as did all first year boys at the hall. I actually had a pretty good time doing it. We had to practise three times a week for two months just to get half decent. It was a good chance to get to know everyone, it pushed me outside my comfort zone, and we got drunk for some of the performances. I even got slightly better at dancing.

But none of that requires it being in the Capping Show.

The ballet could be a special event where Selwyn invites all the exies back to see it, it could be a joke to weird out high schoolers on open day, or maybe the halftime entertainment at a Selwyn vs Knox sports event.

It’s not the responsibility of the Capping Director to keep the Selwyn Ballet going on life support, purely because it is so old.

So, to next year’s Capping Director: this show is your baby. You’re a paid professional. You’ve dedicated almost a year of your life to this show. Every single word uttered on stage will be chiselled to perfection by you, all in the hope of making the funniest, most entertaining show you possibly can.

Do 40 half-drunk boys in dresses make the cut?