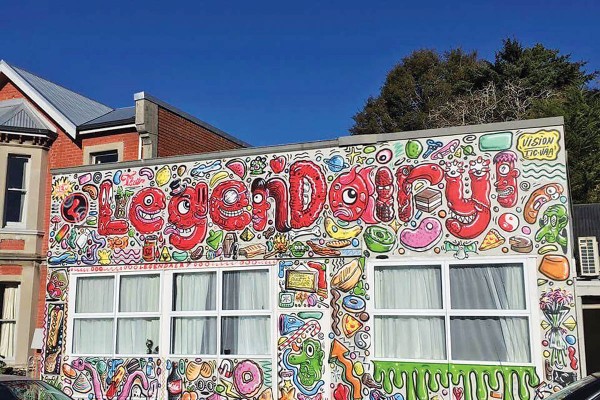 Flatting while studying is one of the most important parts of student life and flat names are a big part of Dunedin flatting culture. Near campus, there is an abundance of named flats, each with their own history. From Pink Flat The Door on Clyde Street, to Legendairy on Duke Street, each named flat has its own unique story.

The research behind flat names has been a long process for Sarah. She originally started taking photos of named flats around studentville in 2000, but it wasn’t until 2009 that she realised she had created a catalogue and began to dive deeper to try and find the stories behind some named flats. “Some of it was pure research and others was serendipity and luck,” said Sarah. After having some articles about her in the ODT, her work gained more attention – with more people sharing their own stories from their flats. “I had people coming up to me saying ‘oh, I have a story about this flat!’ It’s been a long and involved process of having email conversations with people and ringing people up. There’s been a lot of archival research going digging and finding information and memoirs.” After receiving a New Zealand History Trust Award in 2011 and meeting Ian Chapman in 2016, the collaborative flat names book started to become a reality.

Sarah’s documentation of named flats from the 1930s with The Bach on Leith Street, all the way to recent times. Over the course of her research many flats have stood out to her. “In the last thirty years, the flat that people recognise and remember the most is Pink Flat The Door, and what's cool about the story in the book is that it picks away a layer that no one else knew except from the guys who lived there. The signs are almost like an artefact that you can use to delve in and tell the story about a particular time. Not about the people and place, but about what’s happening in wider society.”

“When I started this, it was purely about taking a photo of the sign. Then I took a step back and I took a photo of the full building, and I never engaged with the people. It was only later that opportunities for that started happening when all the photos went on Facebook and Flickr; it’s only been occasionally that I’ve talked to residents in the flat at that time. But something I’ve observed is that students who live in the flat at the time generally don’t have much to say about their flat sign. My theory is that people a few decades down the line have a lot to say. I think it’s because when you’re living in something you’re in the moment, and you don’t have the time or space to reflect. What I’ve found talking to people my age and older (and younger as well), is that they look back with glassy eyes at these times in these flats and it’s like they’re back there again. It’s a memorable time, and whether or not students name their flats I hope they treasure the time they have.”

For Sarah, flat names are truly a unique and important part of student life. “It’s really a subculture. If the culture is students, the subculture is students who name their flats. It’s a thing that some people get into because maybe they want to fit into that environment and they want to feel like they belong, create an identity for them and their flat.” The experience of flatting and living in a named flat adds to the extended adolescence of being at University. “There’s a short time in students’ lives between leaving home and being a kid and joining the adult world full of responsibilities. It can be a very creative time because you are busy with school, work and social life, but it’s a magical time. It’s an experimental time when you’re becoming the person you’ll eventually be. You make all kinds of stupid mistakes and do some crazy shit and have lots of fun with lifelong friends.”

Scarfie Flats Of Dunedin contains lots of photos, anecdotes, and historical information about some of Dunedin’s most iconic named flats. With contributions from a wide range of people and archives from the likes of the Hocken, Critic (woop that’s us!) and OUSA, the book contains specialised chapters each placing a different outlook on flat names for a wider community project. “I think it’s really important that people get excited about them, even if they don’t know much of the history.”

You can purchase the book from the University Book Shop, Paper Plus, and FishPond.