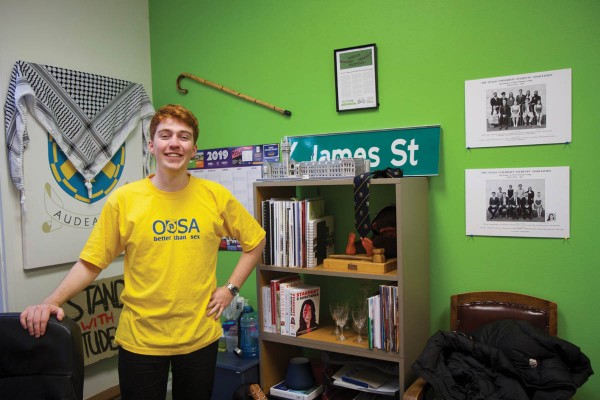 a very important boi with a very serious job

You may have seen his iconic black puffer jacket around campus, or his face on some election still in the Richardson building, but who is James Heath? Is he the vigilante hero we all need? Or is he secretly the admin behind UoO: Meaningful Confessions? Surprise! James is actually the President of the Otago University Students’ Association.

James originally got involved within the student community body by volunteering for Rotaract in 2016, working to create a wider sense of community outside of the student area. James was first elected onto the OUSA Executive in 2017 as the Colleges Officer, providing support and ensuring a positive experience for students within halls of residence. In 2018, James was elected as the Education Officer involving representing and advancing educational matters.

However, his biggest venture yet has been becoming the President of OUSA for 2019. After being nominated for the role and rigorous campaigning, James was elected to be the positive and powerful voice for students at Otago. Being President is no easy feat, as it requires a lot of time and effort. But in this case, the rewards seem to outweigh the hard work. “Making a genuine difference in [a] student’s life is really why this role, and OUSA, exists - if that wasn’t important to me then I’d be the wrong person for the job. Making a difference, as cliché as it sounds, is why we all do what we do. This isn’t just for OUSA, but Silverline, Red Cross, and all the amazing people in this community.”

“One of the things I’m most proud of this year is probably my Convocation Speech (the speech to freshers at the start of the year). Not the speech itself but because, according to our Student Support Centre, it directly led to more students going to Student Support around mental health and other challenges this year than any other year - some directly stating ‘convocation’ as why they felt comfortable to come. This is what’s important to me in this role.”

Although he has only been in this role for a few months, being President has already taught James a lot of valuable life skills. “OUSA President is a role of growth - it’s constantly pushing me, challenging me, and teaching me new things each week. I’ve also gained some life changing experiences, such as MC-ing the Christchurch Terror Attacks Dunedin Vigil, alongside Hamzeh Obeidat, in front of 18,000 people, and learning how best a leader and community should respond to such terror. Working at this amazing Association gives me some amazing experiences each week.”

There are many more things James wishes to achieve while being President. On a wider scale, mental health awareness on campus and engagement with Te Ao Māori are two things James is working towards. But James also believes that “there are lots of smaller changes that can be just as significant (such as a new constitution as much as that’s exciting) and a lot of day to day tasks and challenges as President that need to be addressed”. But what is important to note is the role students have to play within the OUSA Executive. As James puts it, “you’re only at Uni once - take every opportunity you can. What better a time to explore hobbies, build professional skills, and begin to show the world you actually give a damn.”

While OUSA does tend to take up a lot of James’ time, he finds it important to take time for himself. “I wish I had time for interests outside Uni and OUSA; my ‘work hours’ and ‘personal hours’ tend to blur a bit. I try to head along to as many things as I can - from a Debating Society debate to SOULS Wine and Cheese. I wouldn’t really count flat parties as work but they’re ‘around campus’”. Although the future is still unclear, James hopes to find a job and “get my life together”. But for now, you’ll be sure to see James in his natural habitat of the OUSA offices, smashing down some dumplings and being a straight up g.