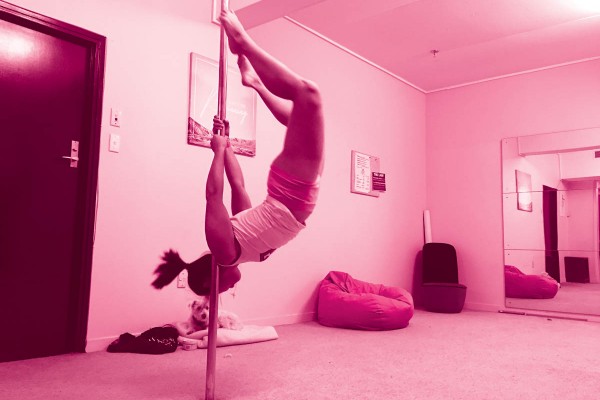 When I think ‘pole dancing’, I think a combination of  ‘strip club’ and those insane videos from ‘Somewhere’s Got Talent’, that defy the laws of gravity and human flexibility. What I ended up experiencing was somewhere in that spectrum, but also something completely different.

I walked into the pole studio, hidden beneath Stilettos strip club, with low expectations and the usual nerves associated with a new environment. The room had soothing purple walls and about 6 poles scattered around facing a huge mirror. Two dogs ran over to say hello (is there a better way to start?) and I was greeted by Val, the instructor from “Pole With Val”. I told her I’m from Critic she smiles, and joked about the two boys who came in last year to give it a shot. (Shoutout to Joel MacManus, we miss you.)

Knowing I had some kind of legacy to follow, I straightened my shoulders and was ready to go.

First is an hour of pole fitness. Now, I may not be the fittest person, but I am a regular gym attendee who tries to stay healthy on a student budget and pole fitness is one of the hardest workouts I have ever experienced. It’s a HIIT (High-Intensity Interval Training) that consists mostly of ab and leg work - that shit KILLED ME. Walking downstairs was hell for a few days after. So, if you want a super intense workout that is also fun and tests your limits, I would definitely recommend pole fitness.

Then we moved to the dancing part. With some much-needed intervention from Val, and shoulder strength I didn’t really have, I was soon swinging around the pole like a reasonably graceful sloth. I was feeling pleased with myself until I looked around and saw some of the other people in the class hanging in insane positions, and doing things the human body surely shouldn’t be able to do.

Despite the wide range of skill levels, the vibe in the class was positive and chill; Val occasionally pounced on people, making sure you “thrust your hips!!!” The encouraging smiles I got every time I slammed my knees on the ground made it a little less humiliating (but didn’t help the bruises).

I spoke to some of the other attendees about their thoughts on the class. Two girls (one who had been going for about four months, and the other for years) shared the love of pole. “It’s addicting, you just want to keep getting better.” There’s something satisfying about flinging your body through the air, and climbing up to the top of the pole so you can touch the ceiling.

My first pole experience was fantastic, and if anyone has been wanting to try it, I seriously recommend you do. Just come prepared with lots of water and leave your dignity at the door (there will be bruises).