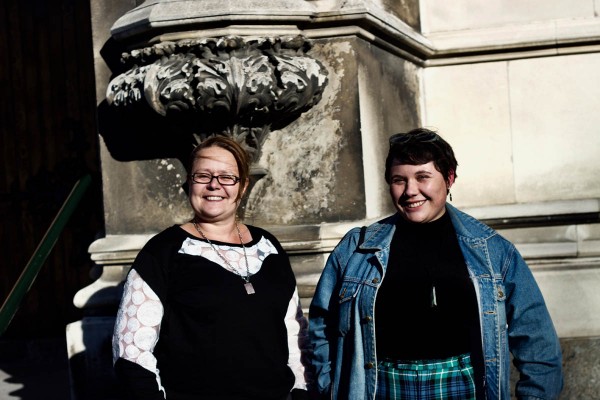 Zoë Hayes and Anna Hendry both wear a lot of hats. They both maintain a busy workload as they work towards their respective Masters degrees. They also work at Rape Crisis.

Anna’s role is that of financial administrator. She’s studying full time towards her Master in Applied Social and Community Work, spending a lot of time on the campus at Otago.  She is fortunate, she says, to work in a “really supportive workplace environment” where people were willing to fit her hours around a demanding study schedule. She fell into the role after returning from Laos, where a self-organised placement as part of a Bachelors of Applied Sciences degree lead to her working with a group of girls who’d been trafficked into the sex industry. She decided to continue the work on her return to Dunedin. “If you’d asked me two years ago, [what I thought I’d be doing] I wouldn’t have thought here,” she said.

Zoë is studying part time towards a Master in Social Work through Massey. She is the funding and resource co-ordinator, for Rape Crisis’ Dunedin branch. As she puts it, her job is to “wrangle the money,” through government contracts and fundraising drives. She has spent three years on the Collective, joining as a part time worker in August 2018 after she began as a volunteer in mid-2016. If she wasn’t working at Rape Crisis, she thinks she would probably be working “in some mundane job” and getting less satisfaction out of it. “I really love working here, even though it’s intense and busy,” she says.

The nature of their work means it is often challenging. Rape Crisis is only partially covered by government contracts, with the shortfall being made up by grants from charitable trusts, private donations and fundraising efforts. “Keeping the doors open” is not always easy, Anna admits, but having an amazing team who accept and acknowledge their differences helps. All employees put in a decent chunk of their time as unpaid hours. “Emergencies don’t slow down or stop,” said Zoë. The workload tends to vary week by week. “Sometimes we see spikes after major student events or weekends”.

The services offered by Rape Crisis are increasingly in demand. However the organisation’s ability to provide, especially with regards to long term planning, are stymied by the insecurity of the funding regime. “It would be great to see the service fully funded,” said Anna, and the service able to pay more of its volunteers. Apart from their core mission of supporting survivors of sexual violence, the Collective also works on education, training new volunteers and interfacing with other agencies (including the University’s Te Whare Tāwharau service). They run a 24-hour crisis support service, staffed after hours by “amazing people”.

Despite the high workload and the demanding nature of their work, Anna and Zoë are passionate about what they do. The organisation is run as a non-hierarchical collective, which they see as a strength, given the unique challenges of the sector they work in. “It has its benefits and it has its challenges,” said Anna, “I think working in this sector as a collective is a really good way of working, particularly as our clients are so vulnerable. The only downside is sometimes employment discussions; because you’ve got so many people and it’s a big responsibility”. Or, Zoë adds, “when there’s a lot of people who are enthusiastic about ideas, it can take a long time to narrow them down.”

Zoë said it’s “the sort of place where if you’re passionate about the work, you get swept away with all the things that need to be done. It’s not for everyone to stay here long term, but we’ve got a really supportive collective and awesome volunteers.” It’s shown in the little gestures of mutual support, like taking the dogs for a walk, or logging off early after an especially tough day.

The organisation usually does a volunteer training intake once a year. In 2019, this will be around July. If you’re interested in getting involved, email support@rapecrisisdunedin.org.nz

Rape Crisis Dunedin support women and gender diverse survivors of sexual violence, as well as whānau and friends of survivors. If anyone is looking for support they can call the 24/7 crisis and support line: 03 4741592, or email support@rapecrisisdunedin.org.nz to book an appointment with support workers.  All their services are free and confidential. There is also Ngā Whītiki Whānau Āhuru Mōwai o Aotearoa (National Collective of Rape Crisis and Related Groups) who have a crisis and support line available at: 0800 88 3300