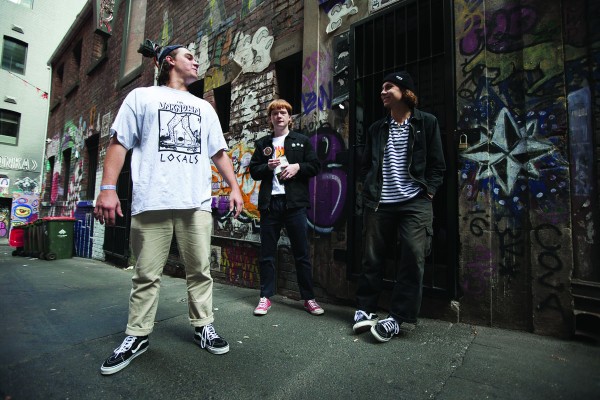 A Chat with The Chats

Queensland shed-rock icons and smoko legends The Chats are coming to New Zealand for the first time. Playing seven dates around the country, The Chats are hitting Dunedin right before O-Week. With hits like “Smoko” and “Bus Money,” the band has taken the world by storm. I talked to their lead singer Eamon ahead of their Dunedin show.

You are obviously in the band The Chats, which is probably one of the most iconic bands of all-time – how did it all come about?

Your popularity skyrocketed after your song “Smoko,” how was that?

It was crazy because it was an overnight thing. I kinda just woke up one day and it was plastered everywhere on the internet and stuff. I don’t know, it was a thing that you don’t really imagine happening so when it does it’s super weird. The same day it went big someone came up and said ‘Oi you’re that dude!’ which was weird.

What is the story behind Smoko?

We had no idea it would become the song it became. I think I wrote that song in 20 minutes. We don’t mind playing it because it’s still the same song we wrote a couple of years ago. But it does get annoying when people come up to us and say ‘Are you on smoko mate?’

Do you have any songs in particular that are your pride and joy?

I’m proud of all these new ones, I think they’re our best songs so far and they sound really good.

Is there anything you’ve written that stands out to you as one of your most memorable lyrics?

Um, not really *laughs*. I think “Temperature” is a bit of a personal one because I wrote that when I was really sick, so that’s probably our most serious song.

That’s good though, you’re singing from the heart.

Totally, singing from the chest.

You guys just announced you’re doing a New Zealand tour which is very exciting, have you ever been to NZ before?

I’ve been to the airport for a changeover flight but never in, I think Matt has. We’re real keen to come. We’ve been having people ask us to come for ages so it’s nice to finally come over here.

You guys released a new single “Do What I Want,” are there any plans for an EP alongside that?

I think we’re gonna release a new single soon then probably an album I guess. We’ve got a fair few songs so I thought we might as well make an album this time, we’ve already done the EP thing.

That’s sick! Now I gotta ask, did your mum really steal your darts?

No sadly (laughs), it was actually a story about a friend whose mum was stealing all of his darts and smoking them all, and would put the packet back with no darts in there. Mum’s still a bit pissed off about that.

When I was a lil’ tucker growing up, chicken crimpy was my go to but I love barbeque now.

You can stream The Chat’s latest single “Do What I Want” on all available platforms, keep your ears out for a new album coming soon.