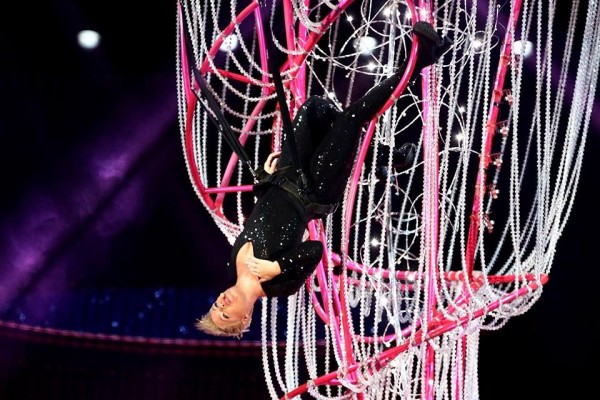 Review: P!nk Rocks, Crowd Does Not

A world class performance from P!NK deserved better than the crowd she got in Dunedin on Saturday

This is not a P!nk review - she put on an amazing show, and if you don’t believe me you can read the ODT website and find the literal torrent of reviews. Rather, I couldn't help but take note of the goings on within the crowd. I don’t know if you’ve ever had to down a Scrumpy and then sit down for four hours, but it’s a pretty sobering experience.

As we squeezed ourselves into our seats, the first thing I noticed was that the large man next to me definitely did not look like a P!nk fan and had quite clearly been dragged along with his wife next to him. A quick scan of the rest of the people sitting around and behind us revealed that there was in fact a whole array of different people who has come to see the show. Not to worry, I thought, we’d all be up and dancing within no time. The warm-up DJ and then the opening act passed without much enthusiasm from the crowd but again, not to worry, the main act was still to come.

When P!nk finally hit the stage with the drop of a curtain and swinging from a huge chandelier, I was propelled to my feet to sing and dance along. Not wanting to stand out and be the only one, I waited until everyone else gathered their enthusiasm and stood up too… unfortunately I was to be waiting the whole night. In fact, the man next to me didn’t move an inch the whole concert, and barely even cracked a smile when P!nk swung upside-down over the crowd while belting out 2008 angsty teenage anthem So What - a rousingly emotional experience for most. At least his wife next to him knew the chorus.

Quick glances around me revealed many more sour-faced sad sacks, including elderly people whose eyebrows hit the roof (good thing there is one) with every sweary or sexual reference that came out of her mouth. I even overheard a complaint about the cold and lament that she should’ve brought a blanket with her - sorry Susan, we should’ve asked P!nk to flick the heating on.

A refreshing contrast to the dragged-along husbands with chronic resting bitch face was the drunk mums and middle-aged women. A group of them along from us that strongly resembled a hens party had clearly indulged in a few vinos - my guess would be a group of primary school teachers letting loose after a long week of dealing with other people’s little darlings. They squeezed past us so many times to go to the toilet (one so far gone she had to be physically carried by the others) that they eventually gave up and resorted to dancing in the aisles. I’m all about it huns, pooh-pooh to the sad boring oldies and live your lives. In hindsight I would’ve had a much better time if I’d joined them.

What our good view also blessed us with was an uninterrupted view of the standing section and the drunk mums (the kind that are active members of Dunedin News) who were happy to stand at the back and dance their best moves all night long. Think the sprinkler, the running man, raise the roof, and the classic step-clap executed with the enthusiasm and precision of a fresher’s first night in 10 Bar.

If you are someone that leaves early and misses the encore to ‘beat the traffic’ then you are the worst kind of person. Seeing thousands of people stream out while she was still performing roused deeply held emotions of anger and frustration that are usually reserved for bad drivers and screaming children. To all of those people… I hope you enjoyed paying hundreds of dollars just to leave early.

As we left (well after the concert had finished) I overheard another bold statement among the grumbles about how slow it was to leave as nearly 28,000 people tried to leave out the same tiny doors; “Every time I come here I remember why I don’t come to concerts.”.

The moral of the story here is that if you are going to go out of your way to attend an international music concert then at least pretend to enjoy yourself, if only for the sake of the drunk mums just trying to live their lives.