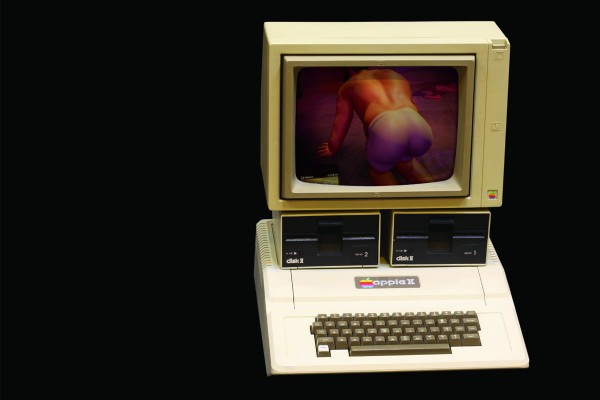 Sex is a reward mechanic. Traditionally, there has not been a history of discussion of consent prior to sex rewards in games. Players assume that sexual rewards will always be given after performing tasks. It does not have meaning other than acting as a trophy.

Recently, a subversion of this has become popularised, where consent and sex are intertwined in the gameplay. Sex is not the reward, it’s the agreement. Realistic Kissing Simulator, Ladykiller in a Bind, and Consentacle are a few that have been highlighted in games media. One creator I want to highlight who also ensures that this is an integral part of intimacy is Robert Yang. Yang is by trade an academic but creates his own games which are all free to play and mostly focus on gay sex and sexuality.

Hurt Me Plenty is a game where you agree on terms with your partner before spanking them. My first run through I didn’t spank him enough, he wanted me to go harder. As a total normie, this made sense, I wasn’t sure when I was meant to stop so I stopped when I thought it was appropriate instead of listening to my partner’s wants. However! I still got the chance to rub his back and listen to how he felt afterward the spanking ended. Yang has stated that if you ignore your partner using his safe word and continue to spank, the game can lock you out for weeks. This is a game where your actions have meaning and consequence! Incredible.

However, Yang’s games have been historically banned from being played on popular streaming service, Twitch. What’s even more bizarre is that they censor his content without any attempt at communicating this to him.

Another one of Yang’s games, The Tearoom,is a fuck you to this unabashed censoring. His content is sexy and it’s gay and while he stuck with these themes in The Tearoom, he did change one thing. The dicks in the game are guns. It is described as a free “historical public bathroom simulator about anxiety, police surveillance, and sucking off another dude's gun”.

This game is absolutely worth playing, the guns start as flaccid and flesh-coloured and as they harden, they appear to become more gun-like. It’s a look at how police used cameras in bathrooms to “catch out” homosexual acts which were illegal at the time.

Rinse and Repeat, Succulent and Stick Shift are a little more obscure, focusing on eroticism rather than sex acts themselves. Stick Shift lets you change gears in a car, gently arousing it. Rinse and Repeat lets you wash a dude in a shower. Succulent lets you stick an ice block in a topless dude’s mouth. Do these sound bizarre to have in games? Of course, because historically games have had little, if any, attempts at exploring these themes. However, films, books, and television series all build on this. Tension, foreplay, consent; it’s the build up and intimacy being celebrated and explored. These are just a handful of games attempting to explore sexuality and eroticism in a way that isn’t simply “press x to cum.” It’s funny, it’s uncomfortable, it’s heart-warming and it’s exactly what games culture needs.