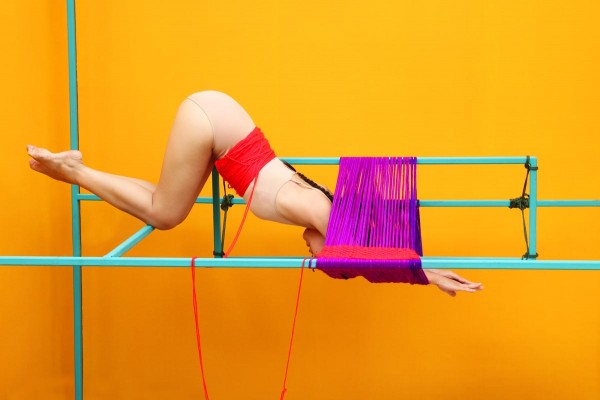 Kawita Vatanajyankur is a striking and transportive artist who has taken the world by storm – she’s about to exhibit at the prestigious Bangkok Biennale with over 75 other artists from around the world, but before that she’s exhibiting at the Public Art Gallery right here in Dunedin. Her work is bold, heavy with meaning, and visually appealing. Waveney Russ had the chance to interview this amazing creative.

Wave: So Kawita, you were the international visiting artist for the Dunedin City Art Gallery, could you give us a run down of what that entailed and where you come from?

Kawita: I’m from Bangkok, but I grew up in Melbourne and found work there as an artist, which caught some attention. This was my first New Zealand show. I had a six-week residency while I was down here in the South Island.

Wave: To what extent does your Thai birthplace influence your work?

Kawita: I grew up as a teenager in Melbourne, so when I went back to Thailand, I felt like I had to grow up as a woman again because the culture, background and social expectations were different. I was a bit of an alien in Thailand; I didn't feel like I would fit in at all unless I re-learned how to be a Thai woman.

Wave: Sort of like a re-birth as a woman?

Wave: Can you tell me a bit about your next series of performance art?

Kawita: The next series is about me looking at myself as a sort of a machine or tool in the work system. Thailand is a world of industry; when I worked there I was transformed into a tool/machine, working repetitively. Nowadays, machines are sort of replacing us. So my art questions the human conditions of labour, and how we value people.

Wave: A video of yours that really struck a chord with me shows you being dunked into a bowl of water. How do you physically prepare yourself for performances like that?

Kawita: It can take around a month to prepare and practice a performance, and the first attempt can be a complete disaster. It just takes practice. When I enter the performance I enter as myself, as a human, but I have to convince myself that I am no longer there, that I am actually the object/machine. It’s about losing your sense of yourself. When you lose that, you also lose your sense of emotional pain, fear, and anxiety. You’ve removed and decreased all of your feelings. You have entered new limitations.

Wave: What do you consider to be your physical and emotional boundaries when creating a piece of performance art?

Kawita: I don’t think that performance art has boundaries. Every time I make art, I want to challenge myself. I believe that our physical body and psychological self have an amazing ability to adjust if you practice continuously. When I think of an idea that seems impossible, I will think of ways to deal with it. It’s about practice.

Wave: Do you have any sort of political agenda when you're creating these pieces?

Kawita: Well all the series I’ve done recently are about work. I’ve done a series about the food industry, and one about the fishing industry – because the world is materialistic, you just assume what you receive is from a machine, not the sea, not nature.

The fishing industry in Thailand is at a crucial point now where the labourers behind it are in a form of slavery, treated unkindly and violently. People are ignoring the human trafficking that drives the industry. When I was in Thailand before coming to NZ, I was researching and talking to the labourers and was overwhelmed by how materialistic this world is. No one wants to be a farmer anymore, they just want to climb the hierarchy. When I came to NZ, it was a completely different world; I talked to locals in the South Island and I saw how workers and farmers are so proud of their products. It crushed me, that you can live simply but fully.

Wave: How do these ideas of obscene consumerism affect the colour scheme in your work?

Kawita: I think that nowadays we live in a world where social media advertisements, posters, and packages look beautiful, but the workers behind the products are being treated unkindly. I think there’s a massive contrast between advertisement and product colours.

Wave: Your videos place a central focus on the human body. How has this been received by different audiences?

Kawita: Well I’ve exhibited in many different countries and the reactions are always different. I’ve exhibited frequently in Japan and audiences there often say that they truly see themselves as machines and want to be perfect all the time. The illusion that physical beauty guarantees respect causes stress and depression. From Thai audiences I get a lot of reactions on the female body and everything reminds them of advertisements.

Wave: Do you see and work with the comedy of the situations you depict?

Kawita: Yes! Well, the content is quite violent and sad when you actually think about it, but I want to use humour so that I can make people laugh before they are offended or shocked. That’s the trick that I want to play.

Wave: So how do you think New Zealand audiences will respond?

Kawita: I’ll have to see – I think NZ is so different from the rest of the world.