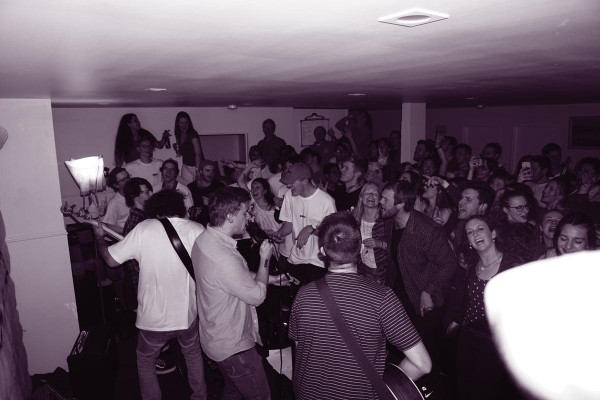 The Shitz Live From Ellis (SOLD OUT): A Gig Review

It was a sharp career change from admins of the meme page ‘Enthusiasts of Cargill St – 178 Memes’, to band life. But The Shitz had every element of a good-to-great concert. They had a photographer, a duct tape line on the floor to stand behind, and instruments. They had a large room with a really low ceiling, and that was fantastic, gig-goers Kelly and Paloma said. There were proper professional stamps on entry and Kelly got four or five on her bottom. They had band merch, with pre-orders so that merch could be worn to the concert, which the band insisted upon so they could bask in the glory of their own creation. Sick.

The new new-Dunedin-sound band re-create what it means to make sweet melodies down in the Dirty D. If the new-Dunedin-sound can be described as misogynistic-surf-soul-rock, then The Shitz can be described as a slightly inbred group of southerners who exclusively play cover songs from iconic clubs such as Boogie and Capone. No, they don’t just play covers, they recreate old songs exactly as they were for an audience who crave the disco daze and 2000s pop of Dunedin’s bygone club scene. Rumor has it The Shitz have made a GoFundMe page to salvage the original light up dance floor from Boogie.

In an axclusive interview in the comfort of his own bathroom, Borrie mentioned that unlike Palmah & Co, who wanted to have a gig but campus watch shut it down, “The Shitz are cooler because we didn’t tell anyone and didn’t get shut down”. Concertgoers were later disappointed shortly after midnight when the gig was shut down by noise control. While they admitted that the gig was a thinly veiled attempt to stroke their own ego, The Shitz were chuffed that people actually seemed to enjoy it.