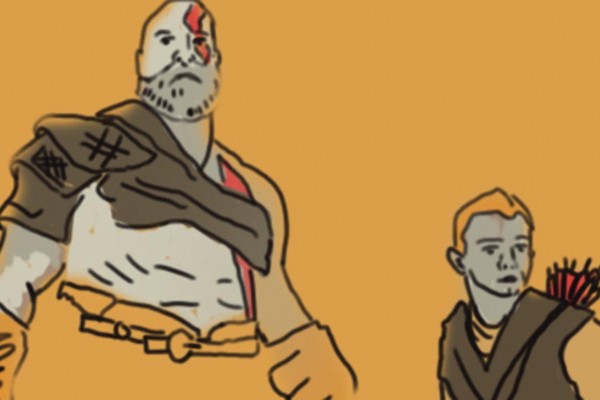 The last time I played God of War was when I was a small high school bean. I was really into Greek mythology because I was a fucking loser nerd and was PUMPED to play a video game surrounding the myths and legends I had come to love. Mainly due to the silly quicktime sex scenes (hello, remember I was 14, thanks) and gratuitous violence I was INTO IT. After playing the first God of War, I didn’t get to play any of the future games in the franchise due to my new-found love of RPGs aka hot anime boys in Final Fantasy and Kingdom Hearts.

Fast-forward ten years. Holy SHIT I am OLD. I am spending ANZAC Day sitting in the same spot on the couch fully engrossed in a new God of War game. I think I rose briefly to pee, do a small house clean and get my washing in. That’s enough responsibility for today, Lisa. Time for some bad posture inducing scoliosis on the couch and throwing M&M’s at my face.

The internet has fondly named the game Dad of War due to the new characterisation of Kratos. Formerly a burly unforgiving killing machine, he has chilled out, perhaps due to the influence of his family. The most important person in that family is our tiny angry son Atreus. Only eight or so hours into the game I am in love. My flatmate was shook. He could not believe I had spent $100 on a game focused on killing and death and war when I typically am a hard defender of games with non-violent mechanics. My love for this game stems from the relationship between Kratos and Atreus. I am all about relationships in games. Although it’s not about dating Kratos (I would though), it’s the formation of the slow growing bond between Atreus and Kratos that had me hooked. Their dialogue as well as movement in the game is so well crafted.

Dads, or Dad-like figures are fairly popular in video games. Take The Last of Us, The Walking Dead and Dream Daddy, for example. Three completely different games with Daddy figures that are all unique and memorable in their own way. I wish someone would do this with Mums in video games but lol, that’s a whole other article. God of War is the same. Kratos still holds his character true to the previous God of War games, but now has a tiny little feisty baby boy to see over. Atreus is a typical curious child, boasting his knowledge about the stories of the land while also questioning everything, even the core gameplay. He asks things like “why don’t we talk to these people first?” or, “do we really need to fight?” Questions I often ask myself while playing games. But of course you need to fight, it’s a God of War game however these little touches dialogue from Atreus really made me appreciate why I am fighting in the first place. There is reason for the violence, rather than just a given unspoken understanding of “well, that’s just how games work!”

Every time you die, Arteus screams heartbreaking shrill cries of “NO, don’t leave me alone here!” or “FATHER!” but he also does this sweet thing where he can resurrect you. Kratos holds Atreus on his back while climbing, boosts him up to higher places, makes classic “are we there yet?” remarks, he even helps you in battle. The two are an inseparable team. Atreus can’t be without Kratos and vice versa, the relationship is so tightly interwoven into the gameplay, which is something I would LOVE to see more triple A games do.