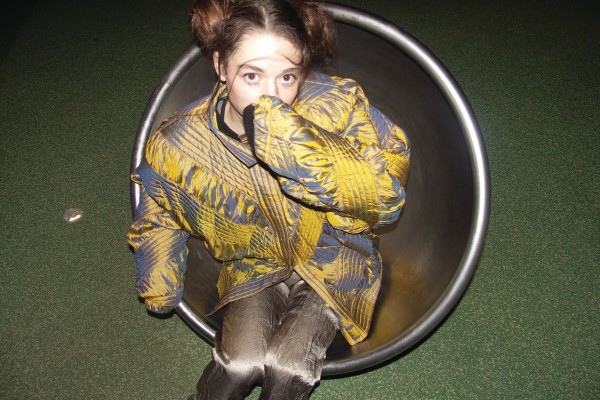 Stumbling into the bathroom of the Cook a few weeks ago, I encountered a small woman dressed artistically in shreds of white material, holding a crown. It was like a scene from a dream, and I was prepared for her to say something incredibly prophetic to me, when I realised it was Indi, the performer I was there to see. It was an incredibly wholesome moment; she was nervously preparing to perform, and I was tending to my sula in the mirror, drunkenly gushing that she would be wonderful. I somehow managed to set up an interview.

Indi, real name Indira Force, has been making music for years as the lead singer of internationally acclaimed, psychedelic trip-hop band Doprah, who Billboard once declared “The Next Big Sound,” something she described as “apparently a big deal.” She’s now making her way as a solo artist.

On stage, Indi is from another planet. She creates rich experimental electronic soundscapes, complemented by her layered ethereal vocals. It's baroque pop at its finest.

Jess: What has it been like, going from performing as a unit with Doprah, to performing independently as ‘Indi’?

Indi: There are changes in the type of people that come to the shows and the audience size. Doprah was extremely fortunate in that we sold out almost every show we ever played and my shows do not have the same following yet (hopefully they will someday!). Performing music only I composed is also quite daunting because the onus is completely on me, rather than the work of a big group; it can feel vulnerable. The amount of musicians on the stage is also very different, and because of that there is a conscious effort to make these solo shows really special visually – there are costumes and projections and flowers – in order to compensate for fewer performers. I did a one-off orchestral band show in Auckland on this tour and I would love the budget to do that every time.

Jess: How would you describe your music?

Indi: It’s hard to understand what it evokes in other people so here are just things I try to write with: overwhelming emotions, otherworldly or fantasy-like motifs – including ancient or mythical imagery and musical ideas, strangeness, texture, dreams. It will always change and evolve though; the important thing is that it sounds like myself in the purest way possible.

Jess: It’s such a unique and transportive sound, which artists have influenced you?

Indi: Thank you! I try not to get overly influenced by particular artists but there are some things I think made a deep imprint while I was growing up. The Beatles were played a lot in my house – I was especially into Sgt. Pepper's Lonely Hearts Club Band – all the psychedelic or colourful songs they did were great though. I loved watching anime so much and especially the Hayao Miyazaki films and scores, which definitely informed my writing. I think traditional Japanese music is so magical. Also Radiohead's Kid A blew my mind when I was a teen; the unconventional sonic elements and sound design in that album are phenomenal.

Jess: Can you tell me a bit about your process when making a song? What inspires you and how long does a song usually take?

Indi: I have been wondering a lot why people ask this sort of question, especially the bit about 'inspiring'. Maybe because people who don't write music might not understand that it is just a constant compulsion to write and that there is no external source of motivation. My process is initially very fast. I write and record about 70% of a song in a single sitting, usually on Reaper, which is my choice of DAW. I then take a big break from it, sometimes over months, and then go back and spend far more time just editing, re-recording vocals and producing the sonic elements more precisely. If there are live orchestral parts involved, I will sometimes have a go at notating them, but if it is too complex theoretically I’ll ask my friend Alex for help. There is nothing better than hearing a group of classical musicians playing and recording the songs! I would love a whole orchestra one day; it is so dreamy.

Indi: I haven't played enough venues as Indi yet, so here are ones from Doprah:

Laneway was really good as a venue. Mostly because the band got to hang out backstage and chat with beautiful people like Kurt Vile, Elena (of Daughter) and all the women from Savages (who were incredibly nice and extremely cool). We were treated so well and so many people came to watch us even though it was an early slot on the smaller stage.

The worst place was probably this really dingy bar for the CMJ fest in New York. We had just arrived from another show and we were all tired. They wouldn't even let me in when we got there because I was under 21 at the time, and then when I finally got to go in right before we played, I found out they had thought the band was a duo rather than a 6-piece. The stage wasn't set up properly at all and it was so tiny; it fucking sucked.

Jess: Can you tell me what your visions are for the future and where you want to take your music? Any upcoming songs/albums/gigs we can mention?

Indi: I am lying on a bed in Amsterdam and headed for Berlin tomorrow. It's an exciting time and I can't wait to meet and collaborate with other musicians and artists here. The album is getting released on vinyl in Europe and I am going to tour it here. There is also a lot of new work on the horizon that I have been writing, and I'm already starting to think about a second album, and about more music videos. I also want to learn more about sound design and modular synthesis, and I want to learn the harp.

Indi has some exciting times ahead of her, working on scores for a short film, a Wellington-based web series, music for a contemporary dance in Singapore, and a UK documentary. She has also been accepted into the Berlin Red Bull Music Academy (alongside our very own Millie Lovelock). Check her out wherever you listen to music.