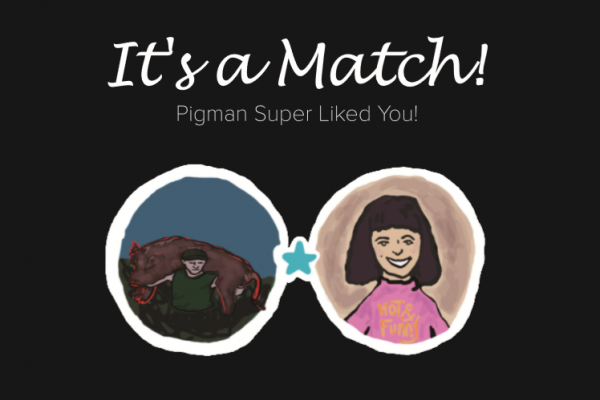 I don’t like Tinder very much because I’m a sensitive baby. I’ve dabbled, but mostly found it an uncomfortable experience. Something about the instant chatting making you reveal more about yourself to hold the other person’s attention, mixed with putting the best version of yourself in a select amount of photos with a witty bio, has made me consistently uninstall and reinstall this game many times over.

“Oi Lisa, Tinder is an app, not a game you dumbass.”

The way you interact with Tinder is a form of play. Swiping fosters competitiveness and you get instant feedback through messages and matches. You are constantly trying to find the “best” match and once you do, you presumably find a partner, date or someone to bang and thus ending, or winning, your session in the game. This “gamification of dating”, as the think piece writers like to call it, is allegedly RUINING dating. Classic. Video games ruin everything. People still think this medium causes mass shootings for fuck sake.

Despite the moral panics, I have recently decided to give Tinder another go, but under the guise of playing with some psychological bullshit and gamification. I’ve displayed two versions of myself to see how many matches I get with people under each identity. My methodology is flawed since I’m only matching with people I actually like the look of. Don’t judge me, that’s what you do on Tinder. You see someone and read their bio and judge whether or not you want to bang/date them. We’re all superficial monsters.

The “best” version of myself (a lie) bio:

I have a successful career in the video game industry, my taste in film is impeccable (notice how I said film and not movies, that’s how you know I’m educated) and I’m really kind and cute. Good luck matching with me lol.

The “real” version of myself (somewhat true) bio:

Hello I do not know how to drive and my only hobby is playing video games which some think is cool but I promise it’s not. This weather change is making my eczema flare up real bad, plz recommend some creams thanks.

My profile included photos of me overseas to show that I’m cultured and well travelled, one of me at Coachella because that instantly makes you seem “cool” (side note: recently found out that festival is funded by a homophobic dickhead, gross) and one of me from my friend’s wedding because I look fancy and have sick makeup. Are people only interested in how I look or will they read my bio and show concern for my terrible skin condition? Let’s find out.

My hypothesis was that the “real” version of myself would get the most matches since Tinder seems to be full of self-deprecating saddos wanting someone to spoon for the night. The “best” version would be met with some harsh criticisms, maybe some accusations of being a narcissist.

The results were as follows:

Either my methodology was flawed or people are really grossed out by eczema. RIP my true self.

Bonus facts: I saw a total of 12 dead animals in my scrolling and three butts of dudes standing by a cliff with some picturesque mountain in the background. Also, a lot of people saying they are “Lost in NZ” in their bios. Unsure what that means, hopefully not lost in the bush cause that’s real dangerous.