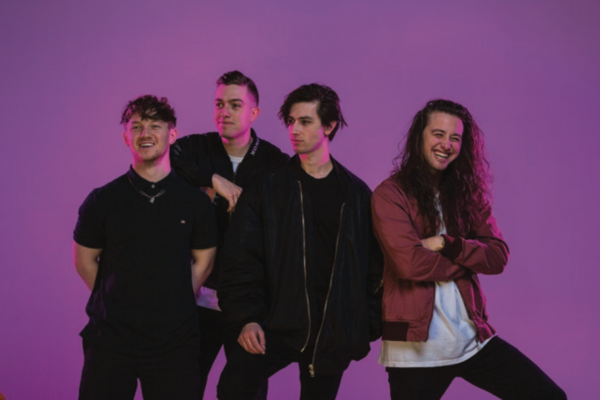 The Meteoric Rise of Drax Project

From Busking to Opening for Ed Sheeran

With over two million streams of their single “Woke Up Late,” two EPs, and a gig opening for Ed Sheeran this year, Drax Project are certainly doing well for themselves.

It’s a long way from where they began, busking on the streets of Wellington. Drax (an amalgamation of the words “sax” and “drums”) are made up of four guys in their twenties, Ben O'Leary, Shaan Singh, Matt Beachen and Sam Thomson.

Shaan, Sam and Matt all studied jazz together at the New Zealand School of Music, and met contemporary music student Ben along the way.

“We all have a really specific perception of how music works through our backgrounds,” Shaan said, “like Matt the drummer has a strong sense of arrangement, and I really love melody, and obviously Sam and Ben play guitar and bass and have a really strong sense of harmony and rhythm. All of us like listening to pop music. It’s almost formulaic and we have appreciation for it.”

Drax P are pretty relaxed and open-minded, although the challenges that come with working in a group are surely present. Looking at bands from history, one might suspect arguments, ego and drama, but it appears these guys are grounded.

“Sometimes it’s really awesome and sometimes it’s hard. I think what you do as a young musician affects how you work with others. We were all in bands in high school and that helps a lot having the experience working with other people. We try to be as tolerant as we can.”

So, no Beyoncé of the group?

“Some people look at it negatively, and they're the kind of people who would be like ‘my ideas are always best.’ But if everyone works together you can make something really amazing. We do everything together, there’s no one person in charge.”

They even go so far as to play in a line on stage, so no one is outshined.

And were they blessed with a single big break? Hell no.

“Did your success feel overnight?” I asked.

“No, not at all. We studied jazz, did gigs for a couple of years, spent a long time fiddling. It was a gradual process. I guess the start was when we got asked to play at a bunch of different bars in Wellington on Courtenay Place.”

In order to attain their NZ chill/banger sound, Drax P have had to move from the streets to the studio.

“Working in a studio so suddenly after coming from a busking and instrument background was pretty strange. It’s like an artist who’s been painting on a canvas all their life being given a computer to draw on. But we’re enjoying it and we’ve gotten more used to it over the last couple of years.”

So how does a song start in the group?

“We’ve found out recently that we work a lot better when an idea is slightly developed already. If someone comes in with an idea for a melody it’s a lot easier for us to pitch in. “Woke Up Late” was created like that.”

This year could be the biggest yet for Drax Project. They're playing Auckland City Limits on the 3rd of March and opening for Ed Sheeran in Wellington. When I asked about Ed they were, of course, cool as cucumbers.

“To be honest I don't even know how we got that. I didn't quite realise how big it was until my grandparents rung me and were like ‘we saw you on the news.’”

Drax Project will also be opening for Six60 in Christchurch this year.

“Honestly, those Six60 guys have really done a lot for us. We met them last year – they invited us to come and hang out with them for a day and talk about music. There were no questions they wouldn't answer and we learned a lot from them about writing music and how to just be.”

“We try to have as little ego as we can musically. We want to make our music accessible and make people dance.”

Chill, hardworking, they know their shit, and aren’t necessarily after money or fame, so long as they can get people to dance. Not a bad recipe for pop sensations in the making.