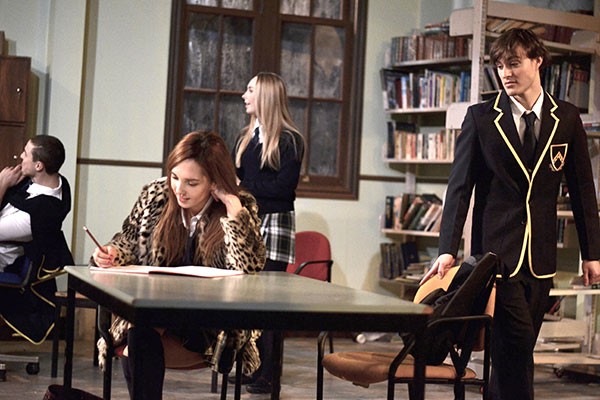 Critic had a chat to artistic director, actor and director Lara Macgregor about directing Punk Rock and what it’s like to work both behind the scenes and on stage.

Punk Rock will be showing from 27 June to 18 July at Fortune Theatre.

You’ve acted in several theatre productions and you are the director of Punk Rock. Is it difficult to transition between actor and director?
Acting is my first language; directing came much later in my career, so I don’t find it too difficult switching from one to the other. As I do far more directing these days, the biggest challenge is not being “match-fit” when it comes to acting. It takes me a bit longer than usual to find my optimum vocal and physical fitness.

I find the transition from artistic director to actor difficult, as I cannot take off my artistic director hat. The company still has to run, I still have a whole season of productions to plan, cast and conceptualise. None of this can stop, so learning lines and being in rehearsal full time, as well as my AD job can be a challenge.

What drew you to direct the play, Punk Rock?
I have admired Simon Stephens’ writing for some time, and had been looking for the right opportunity to include him in our season; this particular play lent itself to a collaboration with the University of Otago Theatre Studies Programme, which I had been wanting to collaborate with for some time, and, most importantly, the central themes to this play are ones that move me to want to elicit discussion in our community.

What do you like most about the play?
Its central themes of pressure and pressure’s effect on our mental health. I also like the clean writing style — there is nothing extraneous — and the fact that it is inspired by a tragically memorable event in our recent history. It has reminded me of the highs and lows of adolescence. The play has also brought together a great group of people into the theatre.

How would you describe the directorial process for Punk Rock?
My process is very collaborative and actor-centric. That old adage that your success as a director is 90 percent casting is so true. I held out for the cast I wanted and it paid off in spades. They’re a fantastic group of dedicated and talented individuals. We have worked intricately on the psychological background of this piece, marrying it with instinctual movement and attempting to honour the playwright as best we can through our interpretation.

What has it been like working with students from the University of Otago Theatre Studies Programme?
The third-year acting students have been a dream. They are completely focused and committed. The energy they have all brought to this project across all disciplines — performance, directing, wardrobe, education, production, marketing — has been inspiring for us all.

Could you describe what your role as artistic director of Fortune Theatre entails?
I am responsible for conceiving, developing and implementing the artistic vision of the theatre. This encompasses programming all shows, casting, directing, sometimes acting, implementing new initiatives, overseeing brochure design, marketing collateral, public speaking, writing press releases, developing budgets alongside the general manager, overseeing every production in the season, overseeing new play development … plus more.

What advice do you have for students wanting to get professionally involved in theatre — whether it be behind the scenes or centre stage?
DO IT! Get out there, try and fail, get involved in your community with theatre groups, acting classes, creating your own work. Aim big. Shoot for the stars. But know what your plan is. Look at all the ways you can shape the career you want. Drama schools, acting agents, auditions, open days … look around, absorb and see what the right fit is for you as far as a theatre degree goes. Don’t be afraid to ask questions if you don’t know where to start. Research, take risks, plunge in and never give up on that voice inside that says this is   your calling...