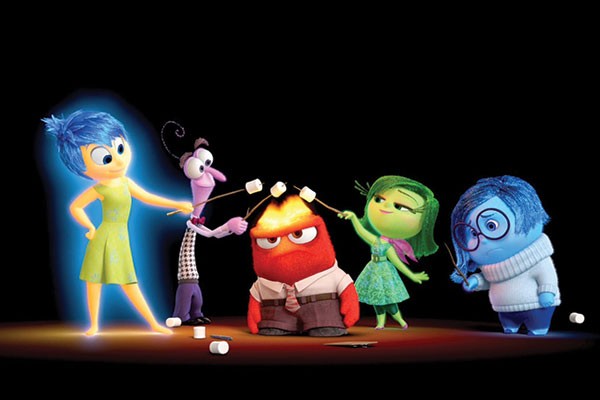 In an interview, Peter Docter once said “when people go to a movie, they want to see some experience of themselves on the screen”, but when I watch a film where the target audience is under the age of twelve, I don’t have high expectations. However, Walt Disney and Pixar’s animated film, Inside Out, went above and beyond what I had anticipated.

Inside Out follows the emotions and thoughts of Riley Anderson (Kaitlyn Dias), a happy-go-lucky eleven-year-old girl who has recently moved to San Francisco with her parents. At first, Riley finds it difficult to remain positive due to her new school environment, the loss of her friends and leaving her hockey team. The main heroine of the story is Riley’s emotion, Joy (Amy Poehler), who tries to guide Riley through this difficult and confusing period. However, when Joy and Sadness (Phyllis Smith) are accidentally ejected from headquarters and thrust into the darkest realms of Riley’s subconscious, chaos occurs as Fear (Bill Hader), Anger (Lewis Black) and Disgust (Mindy Kaling) are left to guide Riley. As the protagonist continues to struggle with her new life in San Francisco, she contemplates running back to old hometown, which ultimately fuels Joy and Sadness’s determination to make it back to headquarters so that Riley can be “happy” again.

Following a classic adventure plot, what could go wrong does go wrong, but the film ends with a flawless resolution. What sets Inside Out apart from other children’s films is Docter’s creativity and visualisation of the mind. The audience is shown unconventional, and at times hilarious, aspects of the mind: imagination, long-term memory, abstract thought, dream production and the subconscious. The director also manages to express a clever metaphorical message that we can relate to: the concept that one needs to be in touch with all of one’s emotions.

The director’s development of Riley’s emotions provides not only laughter for the audience but also a sense of delicacy. It invites an audience of all ages to be entertained and to see old issues in a new, thought-provoking way.

Tags:   culture film review inside out