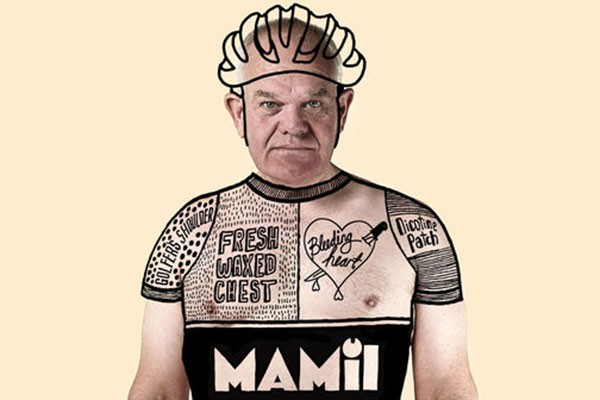 My father is a MAMIL. I don’t like to talk about it, but it’s true. So while, initially, the main character of MAMIL sparked anxious flashbacks to the time my dad turned up to a parent-teacher conference night with only a thin layer of polyester-polyurethane copolymer between his crotch and my English teacher, I was able to put that aside (read: suppress) and enjoy the production.

Central to the story is a man-machine relationship not seen since Hogarth and the Iron Giant, or Anakin and R2-D2: that of Bryan Cook and his Italian bike. The show follows Bryan, a property developer who drives a BMW X5 and listens to his complete Tom Jones vinyl collection. However, this lifestyle all comes to an end during the 2007 financial collapse. His wife kicks him out and smashes his Tom Jones vinyl records. Downtrodden, Bryan spends his last few dollars on a bicycle to avoid the grocery-whispering weirdos on the buses and, from there on, his pedal-powered journey to bankrupt redemption begins.

The prolific Mark Hadlow is a middle-aged man in lycra in the play of that acronymic name, though, thankfully, the cling-wrap costume doesn’t debut until the audience has warmed up to Hadlow’s cheeky charm. Writer and director, Gregory Cooper, has crammed nine characters into the capacious body of Hadlow, who transfigures in a heartbeat from a dweebish auditor to a creaking grandfather. The efforts of lighting designer, Jane Hakaraia, affirm each changeover, maintaining the dynamic even in rapid and frenzied bickering between one man, his Wagner-worshipping doctor and his disremembered member.

The script is clever, rude and perfect for a gregarious actor like Mark Hadlow to be at the centre of attention for 85 minutes. There are times when the show suffers from a narrowness of perspective, the racial stereotypes are trite — if not odious — and hearing about the tribulations of upper-middle-class white men can be tiresome. However, if you want to scratch that polished-theatre itch, laugh loudly and see deft character acting, then take advantage of the $20 student tickets.