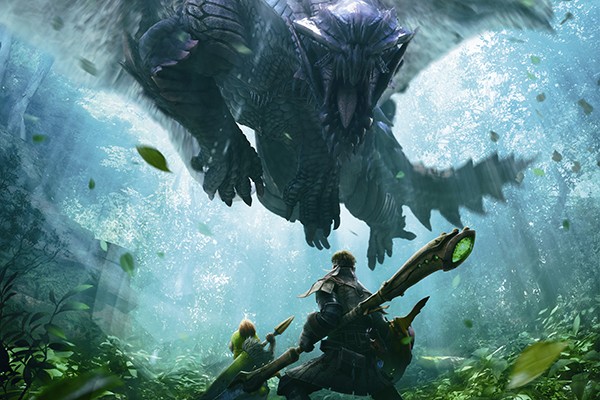 The Monster Hunter series is unlike any other; the games are pretty much a genre unto themselves. When you pick up Monster Hunter 4 Ultimate, or MH4U, you’re going to be pitted against some of the most interesting, intimidating monsters you’ve ever seen — and expected to conquer them all. The monsters range from a creature who stands double your height to a 440-metre-long snake-like dragon that literally winds around a mountain, destroying parts of it in the process, to kill you.

New players can enter the series with no prior experience. It won’t take you long to get into the real meat of the game — the large monster hunts. There are no warning circles, cones or flashing user-interface elements. The first time you face a monster it may end in frustration, but that just makes the eventual kill all the sweeter. The combat system is simple to learn, and difficult to master. The weapon movesets have rhythm, but the hunters themselves don’t have the effortless grace of Devil May Cry or other action games, with animations interruptible only by the monster trying to kill you.

The story in this latest edition is similar to the last games; it is more of an amusing thread to tie the monster slaying together than an epic tale. The non-player characters all have surprisingly light-hearted dialogue for people living with giant, raging beasts terrorising them constantly. Unlike other Monster Hunter entries, there are multiple towns as you progress. Of course, you’re still pretty much going to have to solve all of each town’s monster-related problems, and supply them with materials to boot — all the while enduring the amusing pet-names they call you.

You have a wide range of weapons to learn how to wield, each with its pros and cons; Monster Hunter may have one of the widest and most well-balanced weapon ranges I’ve ever experienced. These, along with the rest of your gear, are created using parts from the monsters you hunt. The scarier your foe, the better weapons and armour it will make.

The largest new addition to MH4U, other than new weapon sets, is the vertical movement mechanics. Thankfully, there is no swimming this time — all of the new movement mechanics are built around climbing, jumping and falling. It is now possible to mount a monster, which is an encounter that starts with a lot of stabbing and ends with either you or the monster landing ass-up.

MH4U is as challenging as it is rewarding. Without any kind of difficulty options, no levelling (save for your fuzzy feline friends) and a steady upwards difficulty curve, new players may find the game intimidating. Progression is entirely based on gear, so to make your next hunt easier, you need to master the hunts you’re already doing. Getting the parts you need is somewhat luck-based, so there is going to be grinding. Monster Hunter is not a game for the impatient.

The grind, and in fact the whole game, becomes better with friends. Multiplayer is where this game really shines, with a whole separate set of quests and monsters meant for multiplayer play. These quests can be taken on alone, but the game supports internet play so why wouldn’t you?

The customisable touchpad from Monster Hunter 3 Ultimate returns with even more control. Unfortunately, MH4U shares its drawback: the 3DS system. With a different control layout to the older Playstation Portable games, camera control is more difficult with the D-pad. The lock-on system from MH3U returns, which helps, but for optimal control you will need the New 3DS system or a Circle Pad Pro add-on, which gives you a second joystick.

Monster Hunter 4 Ultimate offers a rewarding and rich gameplay experience unlike anything outside the series. With countless hours of gameplay, an immense amount of content and multiplayer capabilities, it certainly delivers bang for buck. I’d recommend grabbing the demo from the 3DS store first, however, because if you don’t enjoy the combat, there’s not much else to it for you.