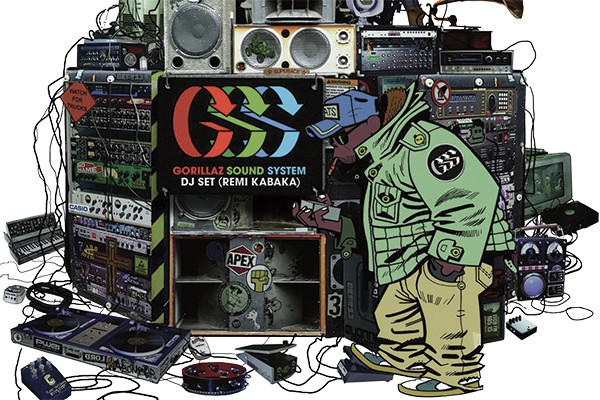 As a big Gorillaz fan, I was intrigued by the curiously-titled Gorillaz Sound System coming to Dunedin. Sure, the name gave away that it wasn’t going to be a bona fide Gorillaz show, and I had no delusions that Damon Albarn might walk out onstage. The show was presented as a semi-official DJ set comprised of Gorillaz songs, with Jamie Hewlett’s unmistakable illustrations serving as a visual backdrop...Or so we were led to believe.

Perhaps I let my optimism run a little wild when I envisioned an energetic mashing-up of Gorillaz material, à la Daft Punk’s Alive 2007 album. I couldn’t wait to hear how a song like “Rhinestone Eyes” could be cleverly juxtaposed with, say, “O Green World”.

The possible combinations of Gorillaz beats and songs began to fractal outwards in my brain, and before I knew it, I was really damn excited for this show. What a mistake that was. When my friends and I lined up outside the Glenroy Auditorium, tickets in hand, little did we know just how colossally fucking disappointed we would be only forty minutes later.

Granted, Gorillaz Sound System started out okay. The first thing we heard was an obnoxiously bassy yet still recognisable rendition of “Feel Good Inc.”, complete with kaleidoscopic visuals. A wealth of Gorillaz material continued to play out on the screen above, showing the cartoon apes getting up to all sorts of mischief. There were seizure-inducing additions to Hewlett’s drawings, sure, but what the screen threw at us was predominantly Gorillaz. Unfortunately, the same could not be said of the music.

After just five minutes, I could not for the life of me identify any Gorillaz material in what was being blasted from the speakers. What started off as “Feel Good Inc.” soon devolved into a fuzzy, nondescript racket, the likes of which you could catch at Suburbia just about any night of the week. My friends and I exchanged bewildered glances. Surely this couldn’t be happening. We had paid fifty bucks to hear Gorillaz. Why was such a minor fraction of what we were hearing actually by Gorillaz?

This assault of ugly, run-of-the-mill dance music continued, with pinches of Gorillaz very occasionally thrown in. I began daydreaming, more intrigued by the BYOers in double denim I had seen in Indian Summer earlier that evening than the show. But when “Clint Eastwood” got a cringey drum and bass redux, I decided I had had enough. I thought of staying until the fifty-minute mark so that I would have at least gotten a minute of concert for every dollar I spent. But I couldn’t do it. Crushingly disappointed and with the early symptoms of a migraine appearing, I left.

If you ever see the words “sound system” on a gig poster that aren’t preceded by the letters “LCD”, avoid said gig. Don’t hesitate. Don’t give it the benefit of the doubt, or think that it may be even faintly close to the real thing. Just keep on walking.