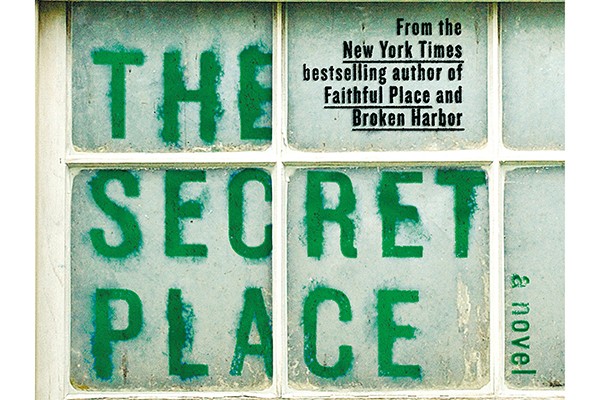 The Secret Place, by Tana French, is a mystery thriller with a peculiarly timeless atmosphere considering how strongly based it is in modern times. The titular secret place is a board that a girls’ private school set up for their students to post their secrets on, in order to provide a monitored alternative to the website the students were using for the same function. A girl named Holly brings Detective Stephen Moran a card from this wall of secrets at her school. The card has a photo of a boy who was found murdered a year ago on her school’s grounds, and bears the message: “I know who killed him.”

After conducting an initial investigation, Detective Moran and Detective Antoinette Conway (whom Moran emphatically does not want to be partnered with) determine there are eight possibilities for who posted the card, the same eight who are possibilities for the murderer. Holly, her three best friends and their four worst enemies.

The story alternates between the detectives’ investigation and what happened between Holly’s group of friends in the year that led to the murder. When poorly used, this kind of narrative switching can be frustrating, but French does it masterfully. She uses it to put the reader in an interesting position — sometimes the reader has information that the detectives don’t, and other times the reader is a step behind when he or she is made to assume something isn’t true because it hasn’t happened yet. The book’s pace also keeps each section interesting. Holly and her friends’ adventures would lack gravitas without knowing what their actions are leading to. Detective Moran’s investigations would likely feel repetitive if the scenes with Holly weren’t there. I preferred Holly’s chapters, but the two sides of the story definitely need each other.

The Secret Place contains copious amounts of vile teenage nastiness, in a very real way. If you don’t want bad flashbacks to being utterly enveloped by your peers’ juvenile, obsessive and degrading attitude towards sex, or if you still get enough of that attitude in daily life, maybe don’t read this. This story is beautifully written, but it’s not a particularly pleasant experience. And, even after reading, the experience still isn’t over. I keep thinking about it, trying to figure out where everything went wrong, and how it could have been fixed. I am not sure whether the book’s feeling of inevitability is only caused by atmospheric tricks on part of the author or not. The Secret Place also has elements of magical realism — and, again, I am not sure why I found this acceptable when usually magical realism crumples my suspension of disbelief as soon as it appears.

This book unsettled me but I loved it. A part of its prologue puts into words a sensation I’ve often had and never had words for: “‘It doesn’t feel real yet,’ Holly says, which is only sort of true but the best she can do. It feels real in flashes, between long grainy stretches of dizzy static, but those flashes are vivid enough that they throw every other kind of real out of her head and it feels like she’s never been anywhere but here. Then they’re gone.” French’s writing is filled with moments like this, where I felt like she was discussing something fundamental to my experience of life. I’m glad I read this — it was spectacular. But it is the kind of story that haunts you.