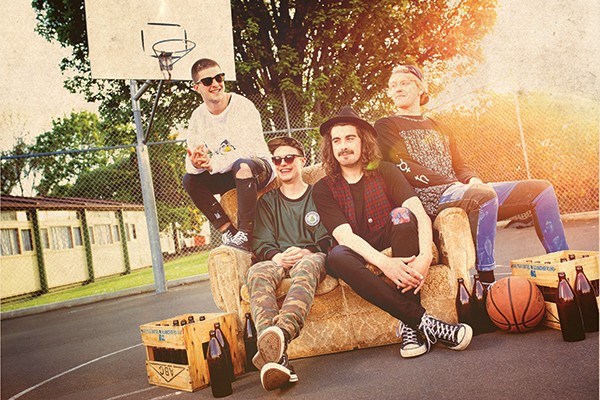 Born and raised in the D, the Summer Thieves have been making waves playing on some of the biggest line-ups Dunedin has seen in recent years. They are currently recording their debut album with the help of Tiki Taane and are joining him at Sammy’s this Saturday 2 May. The band is made up of Angus Cleland, Adam Spencer, Jake Barton and Johnny Ward. Johnny couldn’t make it to the interview, but we caught up with the rest of the band to talk drinks, basketball and working with Tiki.

Critic:  First up, let’s introduce you boys with the important stuff. What instrument do you play and what is your drink of choice?

Angus: Keys/synth, sampler, percussion and my drink is Rum and Coke.

Adam: Bass, and I rate a hearty Pilsner.

Critic:  Last week you had a three-on-three game of basketball against the Highlanders. Who dreamt up that idea and how’d it go?

Angus: We all met Aaron Smith last year, and I remember seeing him in town that night and he talked some trash telling me he’s nice with the rock, haha. Jake hit him up for a game through Instagram and then surprisingly it actually happened. We won the first game, but their fitness and deep bench vs. our hangovers won in the end.

Adam:  We need to work on that match fitness!

Angus:  I try to approach every show the same and not take it for granted, whether it’s at the stadium or someone’s flat.

Adam:  Every show should be taken the same; obviously some will come with a few more nerves, but all shows are equally as important and treated the same.

Critic:  Obviously you’ve got a loyal fan-base down here. Do you find playing down here any different to the rest of the country?

Adam: It’s always going to be different in another town, but [we’re] finding over time in other towns/cities we’re getting more and more people coming and being pretty familiar with us and our music.

Angus:  I feel it’s hard to compare shows based solely on geography as some big gigs in other cities have obviously been amazing, but on the other hand we can play anywhere down here and there’s always those loyal fans.

Jake:  A lot of our tracks are completely new to a lot of our audience while away on tour. But dudz town is always a good party … hard to top this city.

Critic:  You’ve been in the studio with Tiki Taane recently, working on your album. How was it working with him?

Angus:  Unreal. Been a big fan of his music for years. Working with him gave me confidence in myself and the lads, that maybe we’re ok at this stuff. He finished a few of my sentences, which was weird.

Jake: It’s been epic working with Tiki as I’ve always been a huge fan. Cool dude.

Critic:  He’s been in the industry for a long time, did he give you any insights?

Angus:  We were in there for days so, yeah, a lot of different insights, but the main thing I took away was musically, just do you. Be real.

Critic:  Because you are all from Dunedin and have emerged from the Otago varsity, people obviously compare you with Six60. Do you guys mind the comparison?

Angus: Na, people love to categorise and compare music, so you can see why they would do that. Plus, they’re massive. I’d say our sounds are pretty different now though. Hopefully we can spread our sound as far as they have theirs.

Adam: They’re killing it and have a huge following … What can be bad about that? The comparison’s always gonna be made, but we’re pretty real about it, knowing that we’re both completely different groups and are doing our own thing.

Critic:  2015’s set to be a big year for you. Can you give us any ideas of what to expect from the Thieves?

Angus:  Back in the studio next month. Shows, as always, and more music. That’s all I really want to do, play shows and release more music.