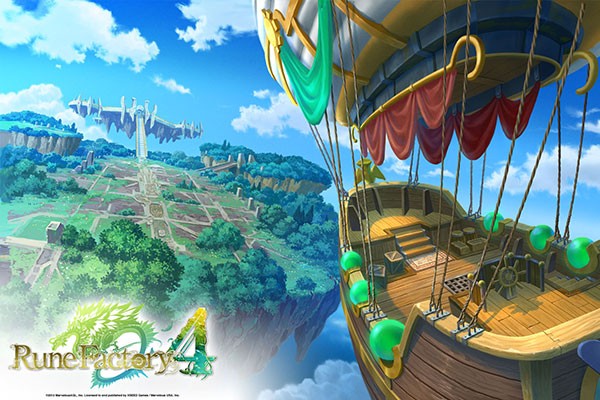 Rune Factory 4 is a Nintendo eShop-only release in New Zealand. Up until this instalment, the Rune Factory games were subtitled with “A Fantasy Harvest Moon”, as the series is a Harvest Moon spin-off. In the Harvest Moon games you run a farm while repeatedly giving gifts to certain villagers until eventually you have bribed them to love you. The Rune Factory games are Japanese role-playing games plus monsters, which doesn’t sound like much. But it is so much. RF4 is over-flowing with things to do.

You play as either Lest or Frey. The game begins on an airship and it is clear that you’re on an important mission. Soldiers who are trying to interfere with your clearly important mission show up, and in the ensuing kerfuffle your character falls off the airship, onto a dragon. The dragon declares that you must be the Prince her village has been waiting for, even if you’re playing as a girl. You can’t contradict her because a blow during the fight has given you amnesia. The dragon ignores your protests and puts you in charge of running a farm and making the village a better place, while your character’s own goal is to get their memory back.

You begin very weak, but you have skills that raise your stats. One of these skills is walking. You get stronger from running around the village. Other skills include sleeping and eating. Everything in this game makes you stronger, and it is glorious because you are given a bunch of monsters to test your strength against. So, in the first week, the easily accessible giant chickens pecked me to death. In the third week, I could beat them if I was very patient and careful, and now they’re no longer a threat. There are always monsters like this. After I beat the final boss of the first plot arc, I went to the area that this unlocked. Although I had been totally over-levelled for the boss fight, the monsters there killed me in two hits.

Rune Factory 4 also has a convenient teleport system. Nearly every villager will accompany you into the dungeon once you have befriended them, and you can train them up until the whole village is deadly. The characters have new things to say every day and will comment on the events of the plot. There are eight different basic types of weapon, all of which are fun to fight with, and there are so many areas to explore.

Still, it isn’t flawless. Although, as a series veteran, it’s not something I can experience myself, the game can apparently be frustrating for new players. There isn’t much of a tutorial. But its biggest flaw is more of a cultural one. If you play this game as a guy, you can marry and impregnate an actually-hundreds-of-years-old green-haired girl who can turn into a monster and looks and acts like she’s 11. But unlike the last game I played where you could marry and impregnate an actually-hundreds-of-years-old green-haired girl who could turn into a monster and looked and acted like she was 11, Rune Factory 4 doesn’t sexualise this girl. Also, in that other game you could marry off green-haired girl to people who were clearly adults. In this game, the only person who can marry her looks a lot like an 11-year-old girl himself. But less creepy does not mean not creepy, and I would like this weirdly specific thing to not be a thing at all.

That’s the only reason this game gets a four out of five. I usually consider any game that elicits an “everybody needs to play this forever” response from me to be worthy of full marks. Get it anyway. It’s so fun.