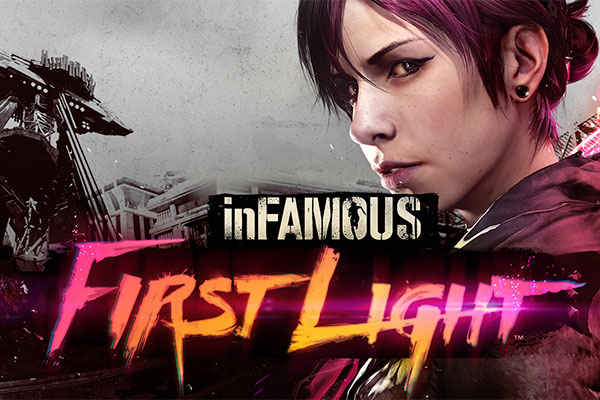 InFamous: First Light is presented in an odd format. A tie-in to the larger title, InFamous: Second Son, and available for download and use without the player having to own the primary title, it’s not quite its own game yet it’s more than just a piece of downloadable content (DLC). This is a release style that seems to be slowly building traction, and it makes sense on a number of levels. Players can dip their toes into the game’s universe and mechanics without having to shell out for a larger game’s price tag, and the developer can use the tie-in as a playable advertisement.

However, for this model — or even standard DLC — to work effectively, the new content needs to bring something fresh to either draw players back to their world or introduce newcomers to it. Unfortunately, here InFamous: First Light falls flat on its face. The main draw of this title is to delve deeper into the past of “conduit” Abigail “Fetch” Walker, one of the protagonist’s super-powered allies in InFamous: Second Son. As it turns out, before we met Fetch — broken, paranoid and unstable — in Second Son, she was a hell of a lot less interesting. Half of Fetch’s cinematic screen time is spent blithering on or throwing a hissy fit over how incredible her brother is and how she’ll freak out if he isn’t around to cuddle her. Sure, she’s a recovering drug addict who loves her brother, but it’s pretty sad to see such a live wire reduced to a whinging mess. This dependency on her brother is a blatant ploy to invoke the player’s emotions when their life is in danger at a later point, but it’s a little too obvious and obnoxious to inspire these feelings naturally.

Luckily, the actual gameplay is still good fun. Fetch’s neon powers (sprinting in light form, firing off lasers and whatnot) feel great to control; zipping around the city never feels like a chore, and her powerset has more depth than any set from Second Son. For those who do own Second Son, that game’s Delsin and all his powers are usable in First Light’s arena battles, which is an extremely cool touch.

Those who have played previous instalments in the InFamous franchise will notice that the combat and control system in First Light/Second Son is similar, but improved upon in most places. If you have not played any previous instalments, have no fear: the plot threads from those games have been more or less abandoned, with new stories built from the ground up. You may feel a little disoriented if you’re jumping straight into First Light, but it weaves its own story without leaning too much on the wider context of the factions and politics that exist in that world. In Second Son itself, however, you’re good to go: the story will teach you everything you need to know.

If First Light pops up for free (as it did for Playstation Plus subscribers) or on the cheap somewhere, it’s worth grabbing to experience zippy combat with beautiful visuals, but keep in mind that this title is essentially a very watered-down version of a much greater game that has more diverse powers, a better story and infinitely more interesting characters.
This article first appeared in Issue 7, 2015.
Posted 2:51pm Sunday 12th April 2015 by Brandon Johnstone.