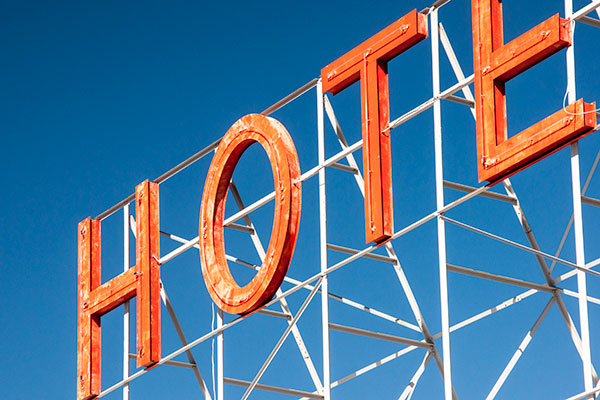 Scott Kenemore’s novel, The Grand Hotel, is narrated by a desk clerk who makes it clear to the reader that he has a sinister ulterior motive when he volunteers to show a group of tourists around the mysterious hotel he works for.

The first guest he takes the tourists to see is a desiccated dead body, although the desk clerk assures the tourists that this dead body still pays its bills and eats the food left in its room. He takes the unnerved tourists to visit guest after guest — each is a permanent resident in the hotel, and each has a story to tell. These stories range from plausible tales of despicable human behaviour to disturbing tales of demons and time travel. Soon the desk clerk begins a game in which he questions the youngest of the tour group, a red-haired girl of twelve, about some detail of the story they just heard. As she gets the answers right, the desk clerk grows steadily more excited. It becomes more and more apparent the tourists won’t be allowed to leave.

Now, that is a lot of horror tropes right there. But I didn’t find The Grand Hotel horrifying. I’m not actually sure Kenemore is trying to make the reader afraid. For one thing, the narrator is enjoying himself way too much. He’s given the tour so many times he knows just how to manipulate people into doing what he wants; he’s putting on a big performance and loving every second of it: “I slump my shoulders wearily, looking crestfallen and disappointed in them. (I must bite my tongue to avoid smiling. In truth, I am nearly trembling with pleasure. Sometimes I actually do tremble, but the group mistakes this for shudders of despondence, which works out just fine.)”

Another strike against any sort of fear factor is that the tourists aren’t differentiated from one another in meaningful ways. None of them have names, few of them have characteristics, and the red-haired girl is clearly the only one who matters. They’re in a creepy situation but there are no personalities to be concerned about or attach to. You don’t keep reading this book because you’re worried, you keep reading because you want to know what the desk clerk’s deal is, and because the whole thing is fun. The stories the guests tell are entertaining, the questions the clerk asks the red-haired girl are interesting, and the answers she gives are often surprising.

A few of the book’s details, however, don’t make sense after the big reveal. For example, the desk clerk wonders why the red-haired girl doesn’t seem to have a chaperone, and points out that no one in the tour group looks like her. I don’t think it spoils the ending to say that, in light of the ultimate reveal, this isn’t something he should have been wondering about. The Grand Hotel uses a lot of the hallmarks of creepy and still ends up being an all-round positive experience.
This article first appeared in Issue 7, 2015.
Posted 2:51pm Sunday 12th April 2015 by Bridget Vosburgh.