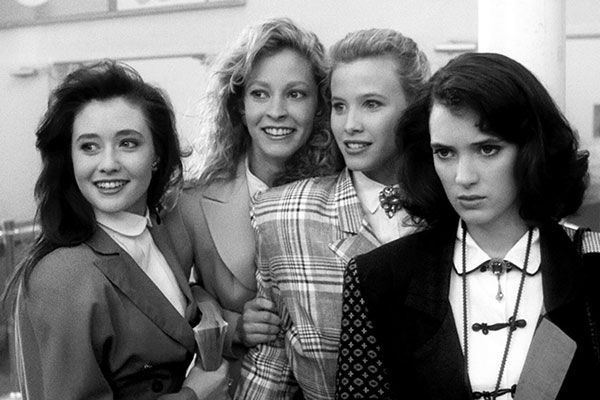 80s coming-of-age films often deal with detention, skipping school, finally getting Jake Ryan to notice you and making your own clothes. However, Heathers breaks this mould with a plotline that is darker and deadlier than any John Hughes film.

While Mean Girls is often hailed as the quintessential teen film, the Plastics have nothing on the scrunchie-wearing, colour-coordinated, croquet-playing girls that make up the most feared and loved clique of Westerberg High School: the Heathers (and Veronica Sawyer — kind of). Heathers focuses primarily on Veronica (Winona Ryder), a girl new to the Heathers; even with her newfound popularity, Veronica is unhappy with her new status and the tyranny of Heather Chandler (Kim Walker). She soon meets Jason “J.D.” Dean (Christian Slater), a guy who has no qualms about pulling a gun on other students, and they later do the deed after a late-night game of croquet.

Veronica finds herself fast becoming the Bonnie to J.D.’s Clyde after they “accidentally” begin murdering people. Thanks to Veronica’s talent for forging people’s handwriting and J.D.’s crazy ideas, the couple are able to cover up these deaths as suicides. As the protagonist puts it herself (while wearing a monocle and writing with a fury that no exercise-book-owning B.A. student could ever compete with): “Dear Diary, my teen angst bullshit now has a body count.” After realising that J.D. is indeed a psychopath, she breaks up with him and does her best to make amends for her past actions.

Heathers is a teen film, but it’s also not. Rather than fulfilling the typical tropes of high school films, Michael Lehmann breaks them apart in a way that is both comedic and sinister. With useless adults who only care about pâté, a protagonist who is awful but doesn’t think she’s super awful (which makes her even more awful), toxic relationships that involve murder, and date rape that is blatantly ignored, Heathers delves into deeper issues; the ability to explore what most coming-of-age films dismiss makes Heathers an 80s staple film.
This article first appeared in Issue 7, 2015.
Posted 2:51pm Sunday 12th April 2015 by Mandy Te.