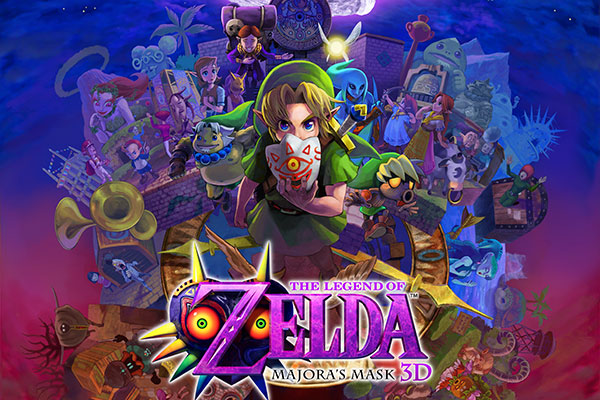 When The Legend Of Zelda: Ocarina of Time was released in 1998, it was hailed by many as a masterpiece. Seventeen years later, it still regularly tops Best Video Games Of All Time polls. It has the same cultural legacy and enduring appeal in the world of video games as the original Star Wars movie has in mainstream cinema. Entertainment website, IGN, hit the nail on the head when it described its 2000 sequel, Majora’s Mask, as “the Empire Strikes Back” of video games. It was a huge risk, changing up Ocarina’s winning formula, but it paid off. Though darker and weirder than Ocarina, Majora’s Mask proved to be just as thrilling an adventure as its predecessor. Freshly remastered for the Nintendo 3DS console, Majora’s Mask 3D takes an already fantastic game and improves it.

Whereas Ocarina of Time had a fairly standard fantasy plot, reinforcing Joseph Campbell’s theory of the Hero with a Thousand Faces, Majora’s Mask is a more psychedelic experience from the get go. The main storyline can be described as follows: the grinning moon you see in the sky is going to fall to earth in three days’ time, and only you can stop it. Already this impending apocalypse gives Majora’s Mask a darker feel; it sounds like Lewis Carroll describing the end of the world. Adding to the voodoo atmosphere is the fact that you must utilise your Ocarina of Time to repeatedly reset this three-day period. Suddenly, there is a mind-boggling Groundhog Day aspect to Majora’s Mask. Though this endless reliving of the same three days could have made for a monotonous game, the information and items you collect contribute to the next cycle being totally different. I won’t disclose any more of how the plot plays out, because that is perhaps the best surprise Majora’s Mask has in store for you. And trust me, it has a few.

As far as the gameplay goes, Majora’s Mask has aged like fine wine. World of Warcraft and other more complex role-playing games may have come out in the fifteen years since Majora, but there is something timeless to Majora gameplay that still delights in 2015. Adding to the experience are the graphical improvements and sumptuous 3D that the remaster brings to the table. Though Majora has always offered a good-looking world to explore — the land of Termina is a weird and wonderful sister to the kingdom of Hyrule in other Zelda games — it never looked quite as good as it does now. Playing with the 3D effect of my 3DS on, I felt as though I could reach inside the screen at any time. With slight improvements to the boss battles and a bit more autonomy when it comes to time travel, my big frustrations with the original Majora’s Mask have been more or less ironed out here.

That said, Majora’s Mask 3D still isn’t the flawless game that Ocarina of Time was. Some of the puzzles you have to crack aren’t exactly intuitive. On top of that, the main quest in Majora’s Mask does feel a little short for a Zelda game. However, the game’s macabre atmosphere and addictive gameplay make up for that. Whether you played the original or not, Majora’s Mask 3D is well worth picking up.
This article first appeared in Issue 6, 2015.
Posted 3:11pm Sunday 29th March 2015 by Basti Menkes.