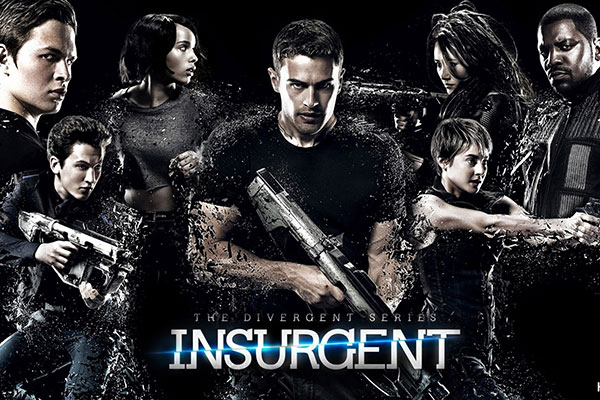 Even though we’re well into 2015, it seems as though the dystopian film fad just can’t be shaken off.

Insurgent picks up where Divergent left off, but this time with Robert Schwentke as director and Akiva Goldsman as the script writer. After the attack on Abnegation’s side of town (that’s where the selfless people live), Dauntless soldier and overall crazy person, Eric Coulter (Jai Courtney), finds an artefact that has the symbols of each faction. Believing that this box will help solve her divergent problem, Erudite leader and the film’s current antagonist, Jeanine Matthews (Kate Winslet), begins a witch-hunt for divergents, as they are the only ones who can pass all the box’s simulations and thus open it.

Meanwhile, protagonist Tris Prior (Shailene Woodley) and her hunky boyfriend, Four (Theo James), are in the hippie commune that is Amity with her annoying brother, Caleb (Ansel Elgort), and the strangely comedic ex-antagonist, Peter Hayes (Miles Teller). Unfortunately, their time there is cut short when Eric and his fleet rudely run over some very nice vegetable gardens and Peter gives up their location, forcing Tris, Four and Caleb to jump on a train to Factionless territory. Without giving too much away, what ensues is a Dauntless reunion, a family reunion between Four and his not-so-dead mother, beating people up, a lot of running, finding out that Jeanine is killing divergents.

Despite the overwhelming heat that radiates from Rialto’s “baby and me” sessions, Insurgent was an engaging and oddly hilarious film to watch. Miles Teller’s performance was what I appreciated the most, as he effortlessly transitions from comic relief to a character that will try to stab you during dinnertime. However, with so many dystopian films out there and the inevitable comparison to The Hunger Games, this film falls short. Even though Insurgent has a spectacular cast, the script lacks any room for character development. It is inundated with scenes of violence and there is no real substance or depth.

Insurgent is an easy and enjoyable watch. If you’re in the mood to see science-fiction-meets-teen-romance-and-good-sarcasm-here-and-there, then this is the film for you.
This article first appeared in Issue 6, 2015.
Posted 3:11pm Sunday 29th March 2015 by Mandy Te.