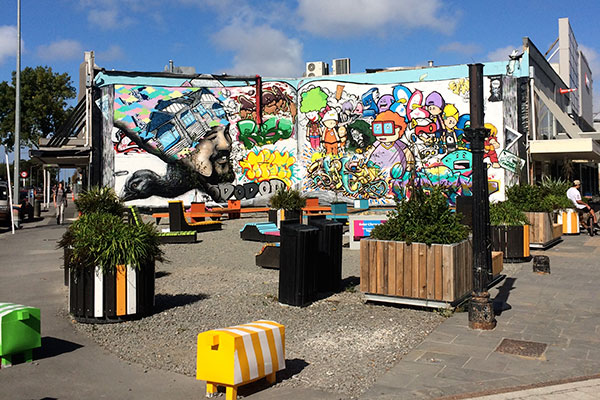 S ince the 2011 earthquake, Christchurch has been undergoing a creative revival. When I was lucky enough to visit the South Island’s biggest city, what I found there was at once shocking and awe inspiring.

Some of what I saw was expected, with rubble, heavy machinery and buildings awaiting demolition dotting the streets. However, some of what I saw was not. Contemporary installations in public squares and multi-storey murals on building walls were everywhere, adding touches of light and beauty to a city in dire need of some positivity. While some of the works were commissioned by the Christchurch Art Gallery, others resulted from freelance artists who felt the city needed something to be cheerful about. One such piece is a three-storey mural that popped up almost overnight on the side of a central city club, Calendar Girls. Done in deep hues of blue and green, the mural serves as a sharp juxtaposition against the grey rubble and fluorescent construction tape that otherwise dominate the scenery.

The variety among the pieces means that there is something for everyone. Just across the way from the Calendar Girls mural stands the Transitional Cathedral, an architectural work of art by Shigeru Ban. The Transitional Cathedral, located in Latimer Square, is meant to serve as a refuge for churchgoers while the ChristChurch Cathedral is under construction. Typical of Ban’s minimalist style, the cathedral is composed almost entirely of cardboard, paper, glass and wood. The selected materials honour the cathedral’s transient nature, while simultaneously creating a feeling of lightness for the congregation. The A-line ceiling creates a large communal space, and the wooden cross on the altar fosters a natural and open environment. At the back of the cathedral, colourful panels of stained glass cast a beautiful glow when the lighting is right.

With ChristChurch Cathedral being a key part of the city’s centre, it’s not surprising that it inspired more works of art, such as Sarah Hughes’ public installation of a vibrant, multi-coloured flag wall. Made of green, pink, purple, orange and just about every other colour in the rainbow, Hughes’ piece is meant to mimic the shingled roof of the damaged cathedral. Hughes’ intention was to add colour to the grey and dust that covered the city when she first started working on the piece about two years after the major earthquake.

Hughes’ installation is representative of the works that beautify a city undergoing reconstruction. Some pieces, on the other hand, commemorate the lives lost in the earthquake. One such installation is “185 Empty Chairs” by Peter Majendie. This piece was by far the most mesmerising I saw. Created on the first anniversary of the earthquake, each white chair represents a life lost in the disaster. The beauty of this piece is in its simplicity. All of the chairs sit together on a 185-square-metre lot but no two chairs are alike, which both creates a sense of unity and symbolises the individuality of each person it commemorates. There is an old leather armchair, fit for a grandfather or mother. A swiveling desk chair, fit for an office manager. A bar stool. Even a child’s car seat.

Artists’ work in Christchurch is saving the city in more ways than one. The pieces welcome you with open arms and serve as protection from the loneliness that is inherent to a city in recovery. “185 Empty Chairs” proves the point well. It is commemorative and respectful, and, ultimately, it’s beautiful. It’s a way to honour those who have passed and to offer hope and beauty for the present and the future.
This article first appeared in Issue 6, 2015.
Posted 3:11pm Sunday 29th March 2015 by Isabel Lanaux.