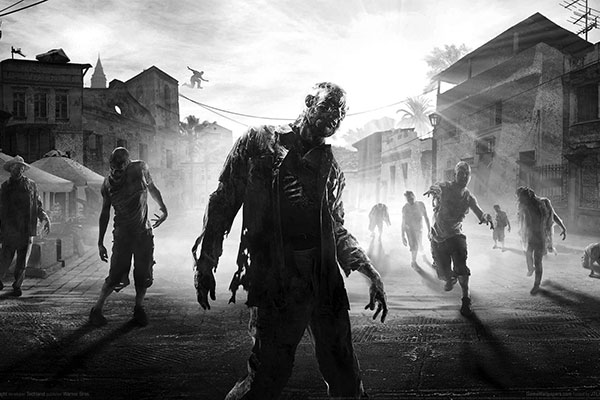 Much like fresher flu, zombies are hard to escape at the moment. Books, movies, TV shows, games: Dying Light is the latest triple-A attempt to cash in on the zombie craze following the giant let-down that was Dead Island. Made by the same developer, Techland, Dying Light takes the Dead Island formula of find zombie, kill zombie in an open-world sandbox (complete with your Left4Dead-style special zombies) and finally manages to get everything right the third time around.

Dying Light is a slick first-person survival horror set in the fictitious but vaguely Middle Eastern city of Harran, which has been quarantined following the outbreak of zombies. You play as Kyle Crane — an undercover Special Forces operator of the Global Relief Effort (what would happen if the CIA decided to pose as a humanitarian NGO) sent in to find an incomplete cure in the hands of your local psychotic warlord. In a nice little twist on the conventional zombie story, your character is bitten within moments of arriving and needs a constant supply of a drug known as Antizin in order to keep the symptoms at bay.

Aside from the mediocre writing, the rest of the game is incredibly well polished. The presentation is stunning; even without fully maxed-out settings, the streets of Harran look incredible with the dynamic lighting and eerily realistic shadows. Unlike most “survival horror” games which pay lip service to the horror elements with some cheap jump scares, night-time in Dying Light is legitimately need-a-fresh-pair-of-pants frightening. While your average zombie isn’t too scary, at night special zombies known as Volatiles come out of the woodwork. Unlike their shambling counterparts, these zombies will actively hunt you, scale terrain as quickly as you do, and will tear you apart if you don’t get to a safehouse in time. The game rewards you with double experience points during night-time to compensate for the additional laundry you now need to do.

The game runs a cool role-playing, game-style, level-up system where you have three skill trees: Survival, Agility, and Power, with you gaining experience in each tree separately based on how you play and what you do. Doing quests or helping other survivors provides you with survivor points, scaling walls and doing random acts of parkour provide you with agility points, and re-enacting American History X on a zombie’s head will grant you power points. Each tree is quite unique and adds more options for how you can play the game — giving you more things to craft, more cool parkour tricks, or more ways to carry out your rampage. The gameplay is incredibly fluid and freeform as each weapon in melee combat has its own feel within the physics engine, while the well-designed environment makes the parkour a treat as you have an unparalleled amount of freedom and mobility.

Dying Light doesn’t waste time with thousands of cut scenes, loading screens or trying to take itself too seriously; instead it emphasises the freeform and fun nature of its gameplay. It’s a hyper-violent sandbox, where the sand has been replaced with sharp pointy things and leaves everything else up to you. If you’re looking for another serious, “oh the humanity / what have we become” zombie game in the vein of The Walking Dead, you’ll be disappointed. If you’re after well-written and relatable characters, you’ll want to throw something after listening to another holds up, spork “quirky” NPC. However, if you want a game that has some solid gameplay mechanics and some of the best presentation since Crysis, then look no further.
This article first appeared in Issue 5, 2015.
Posted 5:43pm Sunday 22nd March 2015 by Isaac Yu.