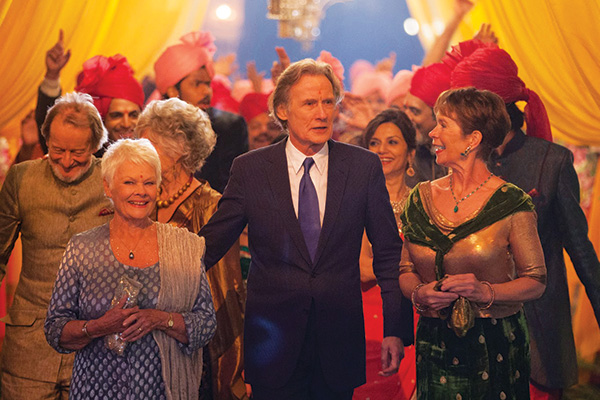 The film firmly establishes the primary motivation of a young Indian hotel owner, Sonny Kapoor (Dev Patel), who plans to create a second hotel, which requires the assistance of the retiring residents of the first hotel to appease hotel inspector, Guy Chambers (Richard Gere). The audience is also welcomed into the residents’ lives as they deal with their own trials of love in their final acts of life.

From the excessive eloquence of Dev Patel as Sonny and the light-hearted snark of Muriel Donnelly (Maggie Smith) to the internally restrained Evelyn Greenslade (Judi Dench) and the loveably befuddled musings of Bill Nighy as Douglas Ainslie, the performances from the entire cast are superb; the actors complement each other with powerful performances that reveal and unravel the inner workings and motivations of each character as the film progresses. I felt personally invited to bear witness to an increasing depth of insight into the characters that I had been introduced to.

Every shot of the film is beautifully crafted to include the stunning scenery of India, which is, in turn, befitting of the heart-warming stories of love, appreciation of life no matter how old one is, exploration of the meaning of maturity, and perception of one’s peers; themes that can still make an impact even without the high-octane pacing present in a lot of today’s films.

The Second Best Exotic Marigold Hotel is an elegantly constructed film that dishes out both joyful laughter and misty eyes of bittersweetness. Even if you are unfamiliar with the first film, I highly recommend you check yourself in for a visit.
This article first appeared in Issue 3, 2015.
Posted 5:30pm Sunday 8th March 2015 by Shaun Swain.